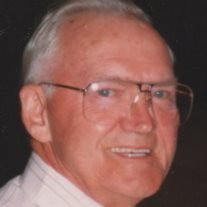 William H. Stiles, Sr., age 92 of Millville, died early Saturday morning, Feb. 15, 2014, in the Millville Center, Genesis. Born in Millville, he grew up there and graduated from Millville High School. He served two years in the U. S. Army during WWII as a T/5. He had worked for the State of N. J. Division of Motor Vehicles’ in Driver Qualifications at the Vineland Armory. He retired after 21 years of service. He was active in the Masonic Lodge. He was a past Master of Shekinah Lodge 58 of Millville, a member of Excelsior Consistory of Collingswood, a member of Crescent Temple Shrine of N.J., and a past President of Cumberland County Shrine Club. He was a founding member and past President of the Millville Thunderbolt Club and past President of N. J. Cerebral Palsy Association. In his retirement he and his wife Dolly lived briefly in Venice, FL before returning to Millville. He and his wife Dolly were happily married for 73 years. He is survived by his wife Laola C. “Dolly” Stiles; two daughters Patricia C. Buckley and Barbara H. Rehmann, both of Millville; several grandchildren; ten great-grandchildren; and three great, great-grandchildren. He was predeceased by his parents Charles and Elizabeth (Broome) Stiles; his son William H. Stiles Jr., and most recently his brother Kenneth Stiles. He was the last remaining survivor of his 12 brothers and sisters. Funeral services will be conducted on Friday, Feb. 21, 2014 at 11 a.m. in the Christy Funeral Home, 11 W. Broad St., Millville. There will be a viewing in the funeral home on Friday from 10 to 10:45 a.m. before the Masonic Service. Burial will be in Greenwood Memorial Park, Millville. The family has requested memorial contributions to the Shekinah Lodge, in care of William Johnson, 28 E. Forest Glen Dr., Millville, NJ 08332, or United Cerebral Palsy, 610 Holly Dell Drive, Sewell, N. J. 08080. Memories and expressions of sympathy for William H. Stiles Sr., may be shared on the Obituary Tribute Wall at: www.Christyfuneralservice.com.

William H. Stiles, Sr., age 92 of Millville, died early Saturday morning, Feb. 15, 2014, in the Millville Center, Genesis. Born in Millville, he grew up there and graduated from Millville High School. He served two years in the... View Obituary & Service Information

The family of William H. Stiles Sr. created this Life Tributes page to make it easy to share your memories.