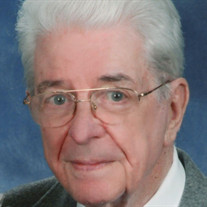 William A. Gebhardt, age 89 of Millville died Saturday afternoon, July 25, 2015 at the Eagleview Nursing Home, Elmer, after an extended illness. Born in Cleveland, NY, he grew up in Hoboken, NJ and matriculated at Fordham University, NY. His education was interrupted during WWII while he served in the U. S. Army Air Corp. He had been accepted in the Officers Candidate School and was commissioned 2nd Lieutenant. At the wars end, he returned to school and earned his B.S. degree in banking and finance. Once again he was called back to serve in the Air Force during the Korean Conflict and retired after 40 years of service as a Colonel. He had worked at the Marine Midland Bank, NY, then moved to Vineland where he worked for Citizen’s United Bank, then Security Savings and Loan. He retired in 1990 as a Senior Vice President. He enjoyed sports and playing golf. He was a member of the New Hope U. Methodist Church (the former Second U. Methodist Church) where he served on its Finance Committee. He also served communion to shut-ins. He is survived by his wife Dolores (Fisher) Gebhardt; one son Bruce William Gebhardt and wife Lauren of Haverstraw, NY; one step-daughter Pat Hayes and husband Bill of Vineland; six grandchildren, Dale Gebhardt of Washington, D.C., Alix Gebhardt of NYC, NY, Kathleen Garrison of Port Elizabeth, Suzie Dalgleish and husband Gary of Millville, Shelley Spears and husband Josh of Texas, and David Hayes of N. C.; and four great-grandchildren, Connor and Ethan Dalgleish and Ella and Nate Rivera. He was predeceased by his parents George and Anna (Delahunt) Gebhardt. Funeral services will be conducted on Thursday, July 30, at 11 a.m. in the Christy Funeral Home, 11 W. Broad St., Millville. There will be a viewing in the funeral home from 9 to 11 a.m. before the service. Burial will be in Arlington National Cemetery, Washington, D.C. at a later date. The family has requested memorial contributions to the New Hope U. Methodist Church Building Fund, 2018 Newcombtown Road, Millville, NJ 08332. Memories and expressions of sympathy for William may be shared on the Obituary Tribute Wall: www.Christyfuneralservice.com.

William A. Gebhardt, age 89 of Millville died Saturday afternoon, July 25, 2015 at the Eagleview Nursing Home, Elmer, after an extended illness. Born in Cleveland, NY, he grew up in Hoboken, NJ and matriculated at Fordham University, NY. His... View Obituary & Service Information

The family of William A. Gebhardt created this Life Tributes page to make it easy to share your memories.

Send flowers to the Gebhardt family.