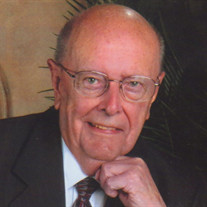 Dr. William Wallace Fithian, Jr., MD, age 87, passed away peacefully surrounded by his wife and children, on August 25, 2018. He was born on February 22, 1931 in Millville, NJ to William Wallace and Jean (Simmerman) Fithian. He attended school in Millville until the 9th grade, and completed high school at the Valley Forge Military Academy, in Valley Forge. Upon graduating from Valley Forge Academy with high honors, he went on to earn a biology degree from Haverford College in Haverford, Pennsylvania, where he graduated in 1953 with honors. The following month was the highlight of his life. Not only did he begin Temple Medical School, in June 1953, entered the Navy through the Berry Plan, but most importantly on June 13, 1953 he married the love of his life, his soul mate, his best friend, A. Corinne Johnson. The next four years proved to be exciting, but hectic ones. Three of his four children were born while he was in medical school. Despite the noise and distractions of a growing family, he still managed to graduate at the top of his Temple Medical School Class in 1957. Upon graduation, in July 1957, he became a reserve officer in the US Navy where he served as Lieutenant in the medical corps. From 1958-1961, he was stationed at the Naval School of Mine Warfare in Yorktown, Virginia. During this time he and his young, growing family (now four children) lived on the Naval Weapons Station, in Yorktown, Virginia where weapons were stored underground and near all the homes. On June 6, 1961, he was honorably discharged from the Navy. On the same date, and from June 6 to August 24, 1964, he was reappointed to the US Naval Reserves. Gladly serving his country, he was proud to be called Lieutenant William Wallace Fithian, M.D. From July, 1961 to January, 1998, he lovingly served his community of Millville. He set up a Family Practice on High Street, working very long hours to care for his patients. He delivered hundreds of babies in the Old Millville Hospital, many of whom he kept in contact with well into his retirement. While practicing medicine, he served Millville Hospital in many different capacities. While on staff, he served as Vice President and President of the medical staff. In addition, he served on the Executive Committee in the capacity of secretary/treasurer for 8 years. He also served on the Hospital Medical Staff ‘Section of American Association. In addition, he served on the executive Committee for the Cumberland County Medical Society as their Vice President and President. He was chosen to be a Delegate to the Medical Society of New Jersey. Being a Member Delegate from Millville Hospital, he served on the Board of Governors as Delegate to the Medical Society of New Jersey. He also served the Meridian Nursing Home as Chairman of the Utilization Review Committee. In June, 1998, Dr. Fithian retired from his medical practice so he could spend more quality time with his family. He enjoyed snow skiing, golfing, swimming and exploring the country in his Winnebago. Being an active member of the Church of the Nazarene, he thoroughly enjoyed his church family. He will always be remembered by the jokes he told and the smile he brought to people’s faces. William Wallace Fithian, Jr. M.D., is survived by his wife of 65 years, A. Corinne (Johnson) Fithian, four children, Denise Cobb (Calvin), Lynette Davies (Douglas), Wallace Fithian (Cindy), and Scott Fithian; Nine grandchildren, Brandon Cobb and Natalie Thom (Denise’s), Alisha Johnston, Lindsey Kuschnerait, and Corinne Asakevich (Lynette’s), Kara Lunneman and Kendra Allan (Wallace’s) and Courtney Tablante and Brittney Miller (Scott’s). In addition, he is survived by 19 great grandchildren. He is also survived by his in-laws Elise Winton and Axel Johnson. He is preceded in death by his parents William Wallace and Jean (Simmerman) Fithian, in-laws Axel and Avis Johnson, brother-in-law Frank Winton, sister-in-law Irene Johnson, and daughter-in-law Karen (Siligato) Fithian. To our family, our dad will always be remembered sitting in “his” chair on the breezeway, talking with mom, us, and his grandchildren while hugging and holding his great grandchildren. Our mom was his angel who met his every earthly need. As she sits and rocks in her chair on the breezeway, his empty chair will bring back all the good memories and times they had in their 65 years of marriage and remind her how truly blessed they were to have each other for so many wonderful years. Until we meet again, our hearts swell for a man we all loved and admired – Husband, Father, Grand Father, and Great Grandfather. A celebration of the life of Dr. William Wallace Fithian will be held on Wednesday, August 29, 2018 at 11:00 am in the Christy Funeral Home, 11 W Broad Street, Millville. Family and friends are invited to call between 9:00 and 11:00 am at the funeral home. Interment will immediately follow at Mt. Pleasant Cemetery. In lieu of flowers, please consider a donation in his memory to Millville Church of the Nazarene, at 2201 E Main St. Millville, NJ 08332 Memories and expressions of sympathy for Dr. William Wallace Fithian Jr., MD may be shared on the Obituary Tribute Wall at www.christyfuneralservice.com.

Dr. William Wallace Fithian, Jr., MD, age 87, passed away peacefully surrounded by his wife and children, on August 25, 2018. He was born on February 22, 1931 in Millville, NJ to William Wallace and Jean (Simmerman) Fithian. He attended... View Obituary & Service Information

The family of William Wallace Fithian Jr., MD created this Life Tributes page to make it easy to share your memories.