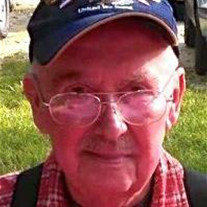 William E. Ernst Sr., age 81 of Millville, passed away suddenly and unexpectedly Monday evening, June 26, 2017 at Inspira Medical Center, Vineland. Born in Shoemakersville, PA to the late Daniel and Mabel (Ulrich) Ernst, he grew up in South Vineland and joined the U.S. Army. He served as a PFC from 1953 to 1955 during the Korean Conflict. He soon married, and started his family in Cumberland. For over 40 years William worked for Wheaton Glass Co. as a mold maker and retired. He served as a Past New Jersey Forest Fire Warden, and was a life member of the Cumberland Volunteer Fire Co. William was an avid gardener, and he was known for his prize winning tomatoes. He also had a special interest in the extraterrestrial. He was proud to be featured in the Weird NJ Magazine for finding a legendary Indian prayer rock, but his greatest joy was spending time with his grandchildren and great grandchildren. William will be sadly missed by his five daughters, Susan Ernst, Karen Macon, Joann Ernst Murray and husband Don, Lillian Johnson and husband Erik, and Mary Smith and fiancé Mike Harrar; two step children, Kathy Sacca and husband David, and Karen Taylor; two sisters, Jeanette Szigethy and husband Theodore, and Nancy Hartem; 16 grandchildren, Georgia, Cynthia, Kara (Brian), Ashley (Hank), David, Kreshna, Luis (Stacey), Stephen (Laura), Zachary (Xiara), Tyler, Destiney, Alyssa, Josh, Kori, Billy and Michael; ten great grandchildren; and his beloved four legged friends, Mira and Frank. He was predeceased by his first wife Alice B. (France) in 1981; his second wife Elaine (Gandy) in 2016; his son William Ernst Jr. on 6/26/2017; one stepson David "Rocky" Hughes; one brother Raymond Ernst; and one grandson Daniel J. Siligato. Funeral services will be simultaneously with the services for his son, Friday, June 30, 2017 at 12 noon in the Christy Funeral Home, 11 W. Broad St., Millville. There will be a viewing on Friday from 9 am to 12 noon in the funeral home. Burial will be in Cumberland Methodist Cemetery. The family requests memorial contributions to the Cumberland Volunteer Fire Co., 5272 Route 49, Millville, NJ 08332. Memories and expressions of sympathy for William Ernst Sr. may be shared on the Obituary Tribute Wall at www.christyfuneralservice.com.

The family of William E. Ernst Sr. created this Life Tributes page to make it easy to share your memories.