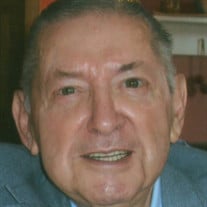 William H. Dixon III, age 88 of Vineland and formerly of Millville, passed away Monday morning, September 21, 2015 at the New Jersey Veteran's Memorial Home in Vineland, where he had lived for the past four years. He had been in declining health for the past four years. Born and raised in Millville, he graduated from Millville High School, class of 1944. Mr. Dixon joined the United States Army and served in the Pacific Theatre as a Corporal during World War II. For 30 years, Mr. Dixon worked as a Meter Reader for Atlantic City Electric and retired in 1989. Prior to that, he briefly worked for the A & P. Mr. Dixon was an avid bowler and participated in a league at Loyle Lanes. He was an avid gardener and enjoyed growing prize winning tomatoes, and an assortment of flowers. He also enjoyed a good cigar. Mr. Dixon will be sadly missed by his children, William N. Dixon and wife Marietta of Millville, Christine Dacy and husband Joseph of Millville, Diane Howgate and husband Bruce of Mauricetown, Cathy Kesler and husband Sam of Millville, and Linda Ponzetto and husband Steve of Vineland; his brother Dale Dixon of Millville; his sister Ruth Slimmer of Maine; eight grandchildren; ten great grandchildren; and many nieces and nephews. He was predeceased by his wife Christina N. Dixon in 2008; his parents, William H. Dixon Jr. and Catherine; one son Robert Dixon Sr. in 1995; one sister Betty Belfori; and one brother Gene Dixon. Funeral services will be conducted at 11 a.m. on Friday, September 25, 2015 in the Christy Funeral Home, 11 W. Broad Street, Millville. There will be a viewing on Friday from 10 to 11 a.m. in the funeral home. Burial will be in Greenwood Memorial Park, Millville. The family requests memorial contributions to the NJ Veteran's Memorial Home, 524 NW Blvd., Vineland, NJ 08360. Memories and expressions of sympathy for William Dixon III may be shared on the Obituary Tribute Wall at www.christyfuneralservice.com.

William H. Dixon III, age 88 of Vineland and formerly of Millville, passed away Monday morning, September 21, 2015 at the New Jersey Veteran's Memorial Home in Vineland, where he had lived for the past four years. He had been in declining... View Obituary & Service Information

The family of William H. Dixon III created this Life Tributes page to make it easy to share your memories.