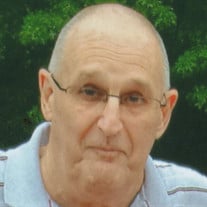 William Allen Cook (Cookie), age 73, died Thursday, September 11, 2014 in Pittsgrove Township following an illness. Bill was a Lead Mechanic for the City of Millville for over 25 years and was known to his friends as "Cookie". He had many stories he liked to tell and was always willing to lend a helping hand to his family and friends. Originally born in Dallas, Texas he resided in Millville for most of his life, except for the last seven years, he lived with his wife Beth Cook of 32 years in Bloomingdale, Georgia. He was preceded in death by his parents Dr. & Mrs. Louis B Cook. Surviving relatives include his wife Beth (Kelley) Cook; three brothers and spouses; Louis B. Cook (Ginny), Stanley Cook (Mike), and James Cook (Terri); his children, Susan Cook Kinnan (John), Cheryl Christian (Sam), Rich Rivera (Kathy), Charles Kelley, Staci Shimp (Chris), Donna Fletcher (Tom), Cindy Coombs (Jeff); eight grandchildren and seven great grandchildren. His favorite pastimes consisted of: over 15 Years as a Volunteer Fire Fighter with the Millville Fire Department, huge NASCAR Fan and collecting NASCAR memorabilia for the Burn Foundation, Trustee for the Millville Elks, Emergency Management Instructor for Boat Safety, Ham Operator for Amateur Radio, Smokey the Bear for the Forest Fire Service, Volunteer Rescue Squad and woodworking. A memorial service will be held at 7 p.m. on Monday, September 15, 2014 at Christy Funeral Home, 11 W. Broad Street Millville. Family and friends will be received on Monday from 6 to 7 p.m. in the funeral home. Burial will be private. In lieu of flowers, memorial contributions can be made to the American Cancer Society, 1851 Old Cuthbert Road, Cherry Hill, NJ 08034. Memories and expressions of sympathy for William Cook may be shared on the Obituary Tribute Wall at www.christyfuneralservice.com. Our family would like to express our appreciation for all the comfort food, support and friendship at our time of loss.

William Allen Cook (Cookie), age 73, died Thursday, September 11, 2014 in Pittsgrove Township following an illness. Bill was a Lead Mechanic for the City of Millville for over 25 years and was known to his friends as "Cookie". He had... View Obituary & Service Information

The family of William Allen Cook created this Life Tributes page to make it easy to share your memories.

Send flowers to the Cook family.