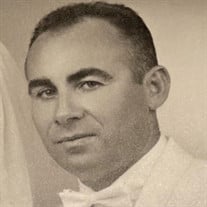 William "Bill" Redka, age 89 of Williamstown and formerly of Vineland, passed away peacefully in his sleep on Saturday morning, August 14, 2021. He had been in declining health for quite some time. Born in Ukraine to the late Gregor and Maria (Demyanyk) Redka, Bill moved to the United States in 1950, settling in Philadelphia, where he graduated from high school. Bill enlisted into the United States Army and served our country for two years during the Korean War in Army Intelligence. He was always proud of his service to our nation. Upon his return from the Army, Bill attended Drexel University in Philadelphia, where he earned his bachelor's degree specializing in Electronic Engineering. Bill met and married his wife Natalie, and they shared over 56 years of marriage together until her passing in October 2020. Bill worked for the University of Pennsylvania, and was in charge of the Orthopedic Engineering Department of Research Laboratory for over 30 years, and retired. All surgical students at the university had to successfully complete Bill's lab class. In 1972 Bill moved his family to Vineland. He was a founding member and instrumental in the construction of Sts. Peter and Paul Ukrainian Orthodox Church in Millville, where he served two terms as president over the years. In his spare time at home, Bill could be found tinkering with just about anything electronic. Bill's family would like to extend a heartfelt "thank you" to George and Linda Lenko for all of their help and support in his care over the years. Bill will be sadly missed by his daughter Natalie Redka Roberts and husband Gene of Littleton, CO; and their two children Kelly Fuqua and Kristen Young and their children; his son George William Redka and wife Suzette of Leesburg, VA; and his two grandchildren, Natasha and Nadia. He was predeceased by his wife Natalie (Samuss) Redka. A Funeral Mass will be celebrated on Saturday morning, August 21, 2021 at 10:00 a.m. in the Sts. Peter and Paul Ukrainian Orthodox Church, 77 Hogbin Road, Millville. Family and friends will be received on Friday evening from 6 to 8 p.m. in the Christy Funeral Home, 11 W. Broad Street, Millville. Burial will be in the Sts. Peter and Paul Ukrainian Orthodox Church Cemetery, Millville. In lieu of flowers, the family requests memorial contributions to Sts. Peter and Paul Ukrainian Orthodox Church, 77 Hogbin Road, Millville, NJ 08332. Memories and expressions of sympathy for William "Bill" Redka may be shared on the Obituary Tribute Wall at: www.christyfuneralservice.com.

William "Bill" Redka, age 89 of Williamstown and formerly of Vineland, passed away peacefully in his sleep on Saturday morning, August 14, 2021. He had been in declining health for quite some time. Born in Ukraine to the late Gregor and... View Obituary & Service Information

The family of William "Bill" Redka created this Life Tributes page to make it easy to share your memories.

Send flowers to the Redka family.