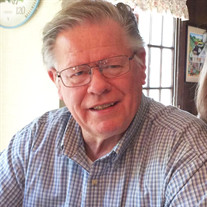 William "Bill" Goelzer, age 79 of Millville, passed away suddenly and unexpectedly on Tuesday, December 4, 2018, at Inspira Medical Center, Vineland. Born in Flushing, NY to the late Charles and Constance (Rowland) Goelzer, Bill graduated from Glen Cove High School in Long Island, NY and earned his bachelor's degree in engineering from Lehigh University. He also furthered his career by obtaining his Professional Engineering license. Bill proudly served our country as an engineer in the U.S. Army (Army Corps. of Engineers) from 1961 until 1964, first at Aberdeen Proving Ground in Maryland, and then Fort Dix. He married his loving wife, Joyce during his military service and together they have shared over 55 years of marriage. He also received a commendation medal from the Army Corps. of Engineers for his superior and dedicated work as an engineer. After serving our country in the U.S. Army, Bill moved to Lancaster, PA in 1964 where he accepted an engineering position with Armstrong Cork Company. In 1966, Bill was transferred to the Millville location, where he worked as a mechanical engineer, retiring after 20 years. He then went on to work for 10 years at the Landis Sewerage Authority, where he retired as the executive director. Over the years, Bill became interested in purchasing different properties in Millville and slowly built an impressive base of tenants. He loved helping others and was quick to make friends with his tenants over the years, and was well known for helping them out in many ways. He had a tremendous work ethic and greatly enjoyed looking over his properties and taking care of his tenants. Most of all, however, he was extremely loyal and dedicated to his wife, Joyce. Bill enjoyed going to countless yard sales and also lunch every day at Burger King with his wife, Joyce. Reading, watching the news, and going to Lowe's were but a few of his favorite pastimes, when he wasn't helping others. But most of all, he cherished the time that he was able to share with his loving wife and family. Bill will be sadly missed by his wife, Joyce (Schlenker) Goelzer; two daughters, Donna Myers and husband Brian of Washington Twp. and Kathryn Volpe and husband Anthony of Pittsgrove; six grandchildren, Billy, Brianna, Ben, Victoria, Tony, and Zack; brother-in-law Ken Schlenker and wife Diane of Florida; two sisters-in-law, Susan and Lori Goelzer; and many nieces and nephews. He was predeceased by his two brothers, Paul and Alan Goelzer. A Funeral Service will be conducted on Monday, December 10, 2018 at 11:00 a.m. in the Christy Funeral Home, 11 W. Broad Street, Millville. Family and friends will be received from 10:00 a.m. to 11:00 a.m. in the funeral home. Burial will be in Mt. Pleasant Cemetery, Millville. In lieu of flowers, the family requests memorial contributions in William's name to the Cumberland County SPCA, 1244 N. Delsea Drive, Vineland, NJ 08360, or a charity of one's choice. Memories and expressions of sympathy for Bill Goelzer may be shared on the Obituary Tribute Wall at: www.christyfuneralservice.com.

The family of William "Bill" Goelzer created this Life Tributes page to make it easy to share your memories.

Send flowers to the Goelzer family.