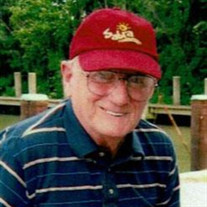 William "Bill" Burkert, age 87 of Vineland, passed away peacefully early Tuesday morning, October 20, 2020 at Inspira Medical Center, Vineland. He had been in declining health for the last several months. Born in Millville and raised in Trenton to the late Edgar and Margaret (Cherry) Burkert, Bill graduated from Trenton High School, Class of 1951. He then went on to serve our country in the U.S. Army as a quartermaster for over ten years. He spoke very fondly of his service, especially while stationed in Alaska. He loved being in Alaska and witnessed the great 9.2 earthquake and 200 foot tsunami of 1964. He was honored to be a part of the great humanitarian effort that took place after the disaster. After his military service, Bill became an excellent chef and worked for many years at the Merry Go Round Tavern in Trenton. He also operated a small restaurant in New Egypt inside the flea market for several years. Bill was an avid fisherman, and especially enjoyed fishing with his brother Roger along the Tuckahoe River and the lakes and streams of Cumberland County. He was also a big fan of baseball and enjoyed watching baseball and other sports on TV. He always considered Millville his home and treasured the time that he was able to spend with his family and friends, especially the Lupperger family. Bill's family would like to extend a heartfelt "thank-you" to the caring staff at the NJ Veterans Memorial Home at Vineland for the wonderful care that he received over the last seven years. Bill will be sadly missed by his brother Roger Burkert and wife Linda of Ringoes; nephew Richard Burkert of Ringoes; niece Christina Chrone and husband Jonathan of Yorktown, VA; great nephew William Chrone of Yorktown, VA; great niece Margaret Chrone of Yorktown, VA; 13 first cousins, Marie (Lupperger) Gerard of Millville, Frances (Lupperger) Martin of Egg Harbor Twp., Jeanie (Lupperger) Amadei of Dallas, PA; Frank Lupperger of Millville, Margie (Lupperger) Flash of Cape May Court House, Teddy Lupperger of Millville, and Carol (Lupperger) Warfle of Millville; Annette (Gifford) Nalbone of Trenton, Catherine (Gifford) Powell of Brick, Chester Gifford of Tucson, AZ, Beverly (Gifford) of Palm Bay, FL, Doris (Burkert) Nicholson of Morrisville, PA, and Mickie (Burchell) Stoop of Ewing, NJ. Services for Bill will be private at the convenience of the family. Arrangements are under the direction of Christy Funeral Home, Millville. Memorial contributions in loving memory of Bill may be made to the Cumberland United Methodist Church, 5218 Rt. 49, Millville, NJ 08332. Memories and expressions of sympathy for William "Bill" Burkert may be shared on the Obituary Tribute Wall at: www.christyfuneralservice.com.

William "Bill" Burkert, age 87 of Vineland, passed away peacefully early Tuesday morning, October 20, 2020 at Inspira Medical Center, Vineland. He had been in declining health for the last several months. Born in Millville and raised in... View Obituary & Service Information

The family of William "Bill" Burkert created this Life Tributes page to make it easy to share your memories.

Send flowers to the Burkert family.