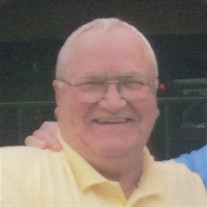 William "Bill" Biggs, age 75 of Millville, passed away Monday evening, March 14, 2016, at Inspira Medical Center of Vineland, after a brief illness. Born in Millville to the late Burnard and Veronica (Stone) Biggs, Bill grew up in Millville and was a lifelong resident. Bill was the owner and operator of William Biggs Construction for over 37 years. Bill was a good friend to many and would do anything for anyone, including construction projects large and small, and plowing snow. He very much loved spending time with his family, especially his grandson Kyle, watching WWE. He enjoyed going out to dinner and spending time at the casinos in Atlantic City. Bill was well-known for his frequent sarcasm, and being a friendly agitator. He will be fondly remembered by many as the unofficial mayor of "His Town". Bill is survived by his loving wife of 22 years and best friend, Linda (Eames); two sons, William Biggs and wife Mindee of Bradenton, FL and Scott Bryant of Egg Harbor Twp.; two daughters, Tina Lloyd and husband Rick of Holiday, FL and Brandi Sheridan and husband Mike of Galloway; one brother Fred Biggs and wife Jean of Millville; six grandchildren, Jennifer, Maddie, Lexi, Will, Tyler, and Kyle; mother-in-law Vivian Eames of Millville; brother-in-law Tom Eames and wife Fran of Hammonton, and many cousins, nieces, and nephews. Bill was predeceased by two brothers Robert and Harry Biggs; and three sisters Ann Kates, Gertrude Hollingshead, and Ellar Cramer. Funeral services will be conducted at 12 noon on Friday, March 18th, 2016 in the Christy Funeral Home, 11 W. Broad Street, Millville. There will be a viewing on Friday from 9 a.m. to 12 noon in the funeral home. Burial will be private. In lieu of flowers, the family requests memorial contributions to The American Heart Association, 1 Union St., Suite 301, Robbinsville, NJ 08691 or The American Cancer Society, 1851 Old Cuthbert Rd., Cherry Hill, NJ 08034. Memories and expressions of sympathy for William Biggs may be shared on the Obituary Tribute Wall at www.christyfuneralservice.com.

The family of William "Bill" Biggs created this Life Tributes page to make it easy to share your memories.

Send flowers to the Biggs family.