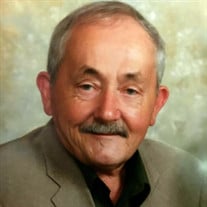 Walter M. Lore, age 76 of Millville, passed away peacefully at home on Wednesday evening, July 17, 2019. Born and raised in Millville to the late Elliott and Annabelle (Pettit) Lore, Walter was a lifelong resident. He graduated from Millville High School, and then went on to work at Wheaton Glass Company in Millville as an operator for over 40 years, retiring in 2007. Walter was a proud member of the GMP Local 219 and GMP Local 7, where he had served as Past President and Financial Secretary. Walter was also the longest tenured member in the State of New Jersey Fraternal Order of the Eagles. Having been a member for over 54 years of the Millville Aerie 1836 FOE, and serving in many different offices, he received his gold pin in 2008. Walter was also a member of the Millville Elks B.P.O.E. No. 580, Millville Moose Lodge No. 2488, and the American Legion Nabb-Leslie Post No. 82 of Millville. Walter loved NASCAR, and was a die-hard Dale Earnhardt, Sr. fan to the core. Some of Walter's other favorite pastimes were dancing, drinking beer, sitting out in his beautiful yard, and going on countless trips with his dog, Shania, to Fortescue, East Point Lighthouse, and Strathmere. Walter also enjoyed listening to Paul Anka and Kid Rock. Most of all, Walter treasured the time that he was able to share with his family and friends, especially his grandchildren. Walter will be sadly missed by his two loving daughters, Carolina Fauver and husband Mark of Millville, and Tabitha Callon and husband Brian of Elizabeth City, NC; two sons, John Elliott Lore of Florida and Walter Patrick Lore of Florida; two brothers, Earl Lore of Millville, and Edward Lore and wife Lea of Millville; one sister Ceolia Carty and husband George of Millville; eight grandchildren, Katelynn, Justine, and Britney Fauver, Mackenzie, Michael and Madison Callon, Erin Branch, and Ryan Lore; many nieces, nephews, and cousins; his good friend Diane; and his loving Cocker Spaniel Shania. He was predeceased by his loving companion Jo-Ann Jones in 2007; and one brother William Lore. A Funeral Service will be conducted on Tuesday, July 23, 2019 at 11:00 a.m. in the Christy Funeral Home, 11 W. Broad Street, Millville. Family and friends will be received from 10 to 11 a.m. in the funeral home. Burial will be in Greenwood Memorial Park, Millville. In lieu of flowers, donations in Walter's memory may be made to a local hospice charity of one's choice. Memories and expressions of sympathy for Walter M. Lore may be shared on the Obituary Tribute Wall at www.christyfuneralservice.com.

Walter M. Lore, age 76 of Millville, passed away peacefully at home on Wednesday evening, July 17, 2019. Born and raised in Millville to the late Elliott and Annabelle (Pettit) Lore, Walter was a lifelong resident. He graduated from Millville... View Obituary & Service Information

The family of Walter M. Lore created this Life Tributes page to make it easy to share your memories.

Walter M. Lore, age 76 of Millville, passed away peacefully at...

Send flowers to the Lore family.