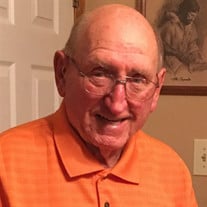 Walter James Ford, age 87 of Millville, passed away peacefully at Inspira Medical Center in Vineland, after a brief illness, surrounded by his loving family and friends, on Friday evening, June 28, 2019. Born and raised in Millville to the late Walter and Helen (Young) Ford, Walt was a lifelong resident. He graduated from Millville High School, Class of 1950 and then went on to work at Wheaton Glass Company in Millville for over 40 years. He started as a maintenance worker, and slowly worked his way up within the company, holding many different positions over the years, retiring as plant manager. Walt was a member of Cumberland County Christian Church in Vineland, where he enjoyed being a greeter. He always looked forward to the Sunday that was his turn to greet the church members and hand out the bulletins. He also looked forward to each and every men's breakfast that he could attend. Walt was an avid bowler and fan of professional hockey, baseball, and football. He was a die-hard Boston Red Sox fan and also enjoyed keeping statistics on many teams, especially Flyers hockey. He would track the games of his favorite teams on his phone, often while he was watching the same game on TV. Walt was full of knowledge when it came to his favorite teams, the Flyers, Red Sox, and Phillies. He was also the proud owner of "Seabiscuit," his 1981 black Lincoln Town Car, and loved to show the car off around town. Most of all, Walt cherished the time that he was able to spend with his family, especially his grandchildren. Walt will be sadly missed by his two sons, David Garrett and wife Dawn of Millville and Brian Garrett of Vineland; four grandchildren, Jessica Garrett, Joshua Garrett and wife Jessica, Samantha Garrett and Troy, and Ashley Garrett; three great-grandchildren, Karsyn, Addison, and Annalise; and several nieces, nephews, and cousins. Walt is also survived by a daughter and son by previous marriage, Donna Bryson of Calhoun, GA. and James Bryson of Millville, four additional grandchildren; and four additional great-grandchildren. He was predeceased by his loving wife, Ann (White) Ford in 2016; two brothers, Paul and Robert Ford; and two sisters-in-law, Ruby and Lynn Ford. A Funeral Service will be conducted on Friday, July 5, 2019 at 11:00 a.m. in the Cumberland County Christian Church, 3141 Dante Avenue, Vineland. Family and friends will be received from 9:00 to 11:00 a.m. in the church. Burial will be in Mt. Pleasant Cemetery, Millville. Arrangements are under the direction of the Christy Funeral Home, Millville. In lieu of flowers, the family asks that memorial contributions in Walt's memory be made to the Cumberland County Christian Church, 3141 Dante Avenue, Vineland, 08361. Memories and expressions of sympathy for Walter James Ford may be shared on the Obituary Tribute Wall at: www.christyfuneralservice.com.

Walter James Ford, age 87 of Millville, passed away peacefully at Inspira Medical Center in Vineland, after a brief illness, surrounded by his loving family and friends, on Friday evening, June 28, 2019. Born and raised in Millville to... View Obituary & Service Information

The family of Walter James Ford created this Life Tributes page to make it easy to share your memories.

Send flowers to the Ford family.