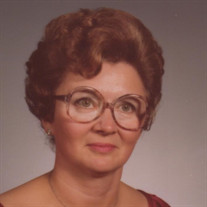 Wahneta (nee Vanneman) Riley born August 26, 1934 peacefully left her life on earth after a lengthy illness on January 6, 2018 surrounded by her family. Nita, as she preferred to be called, was born and raised in Millville where she lived the majority of her life. She resided in Douglass MA for 36 years and returned to Millville in 2010. Nita worked in the banking and insurance industries for more than 40 years, a large part of her career she held management positions. While working and raising her children she was involved in her daughters’ many activities and supported their involvement in Girl Scouts, Church, Sunday School, Methodist Youth Fellowship, school activities and clubs while encouraging them to strive for great grades. Through the years Nita created and maintained many family traditions which her daughters have continued with their families. It gave her great joy to see family traditions live on. She was known for her homemade cakes and cookies. As Christmas approached, each night involved baking various types of Christmas cookies to be shared with family and friends. Many of her recipes were passed along and are still being made by her daughters and granddaughters, including her famous coleslaw, a recipe she created. Sunday and holiday dinners were always at Nita’s until her daughters began hosting the dinners where Nita continued to help with the preparations. Through the ups and downs of life Nita wanted to be regarded as a good, caring person. She would help anyone in need and donated to many charities. Her church family was very important to her and she made an effort to attend church even when her health was failing. Nita was predeceased by her husband Warren H. Riley and daughter Sherry Anne Hinds, her parents Albert and Mary (Murphy) Vanneman, her brothers John, Maurice, Russell and Albert Jr., her sisters Alice Fisher, Laura Christian and Mary Schoch. She will be sorely missed by her daughters Terry Hershberger (Jim) and Celeste Riley, grandchildren Krystle Hinds (Jeff Weston), Frank Hinds (Natalie), Nicole Hinds (Soren Hudyma), Erica Sinni and Alex Sinni, granddaughters by marriage Jayme Layman (Keith) and Trina Hershberger, great-grandchildren Anna Hinds, Elijah Hinds, Gabe Young, Morgan Young, Joel Layman and Dalton Layman. Others who will miss Nita are her brother-in-law and sister-in-law El and Marie Riley, nephews and nieces, friends and church family. Nita’s family is grateful for the caring services of Assoumta (Susie) Allaindanguet during Nita’s failing health. Celebration of Life services will be held at 10:30 a.m. on Wednesday, January 10, 2018 at Christy Funeral Home, 11 W. Broad Street, Millville, NJ, followed by interment in Greenwood Memorial Park. Family and friends will be received on Wednesday from 9 a.m. to 10:30 a.m. in the funeral home. In lieu of flowers, donations may be made to the Buckshutem United Methodist Church, Buckshutem Road, Millville, NJ 08332. Memories and expressions of sympathy for Wahneta Riley may be shared on the Obituary Tribute Wall at www.christyfuneralservice.com.

Wahneta (nee Vanneman) Riley born August 26, 1934 peacefully left her life on earth after a lengthy illness on January 6, 2018 surrounded by her family. Nita, as she preferred to be called, was born and raised in Millville where she lived... View Obituary & Service Information

The family of Wahneta Riley created this Life Tributes page to make it easy to share your memories.

Send flowers to the Riley family.