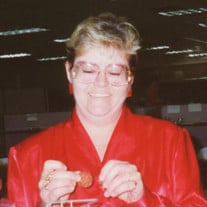 Virginia Lee (Price) Stevens, age 67 of Millville, passed away peacefully in her sleep on Saturday, June 15, 2019 at South Jersey Extended Care, Bridgeton. Her health had been slowly declining over the last several years. Born in Millville to the late Joseph and Harriet (Brecht) Price, Ginny attended Millville High School and was a lifelong resident of Millville. Ginny met and married her late husband, John Stevens, and together they lovingly raised their two sons, Bill and Tony. Ginny had several occupations over the years, but primarily she worked as a Claims Representative at Prudential in Millville for over 20 years, and retired in the early 2000's. Dancing, playing canasta, and doing puzzles were but a few of Ginny's favorite pastimes. She also was a huge John Travolta fan, and especially loved his performance in her favorite movie, "Grease". Ginny had a tremendous affection for dogs, and rescued many over the years, including Duke, Sable, Goldie, Chi Chi, Freckles, and Babe. She also enjoyed volunteering at the Cumberland County S.P.C.A. and Petsmart in Millville for many years. For Ginny, family was everything. She truly cherished the time that she was able to spend with them, especially her grandchildren. They will always remember the special memories of many trips with their grandmother to the zoo, park, going swimming, and making the fairy houses together. Her family was truly her life. Ginny's family would like to say a heartfelt "thank you" to the caring staff at South Jersey Extended Care, especially Suzy Torres for taking such good care of Ginny over the last five years. Ginny will be sadly missed by her two sons, Tony DiSario & wife Josette of Millville and Bill DiSario of Millville; one brother Albert Price, Sr. of Millville; one sister Diane Riggins & husband Frank of Port Elizabeth; four grandchildren, AJ, Nicholas, Travis, and Samantha; three great-grandchildren, Elliana, Bentley, and Trevor; many nieces, nephews, and cousins; and her best friend Babe Farrell of Millville. She was predeceased by two brothers, Maurice and Harry F. Price; and two sisters, Ruth Hildebrand and Barbara Roun. Funeral Services for Ginny will be private at the convenience of the family. Arrangements are under the direction of the Christy Funeral Home, Millville. The family requests that memorial contributions in Ginny's memory be made to the South Jersey Regional Animal Shelter, 1244 North Delsea Drive, Vineland, NJ 08360 or online at www.southjerseyregionalanimalshelter.org. Memorial contributions may also be made to the Alzheimer's Foundation of America, 322 Eighth Avenue, 16th Floor, New York, NY 10001 or online at alzfdn.org. Memories and expressions of sympathy for Virginia L. Stevens may be shared on the Obituary Tribute Wall at: www.christyfuneralservice.com.

Virginia Lee (Price) Stevens, age 67 of Millville, passed away peacefully in her sleep on Saturday, June 15, 2019 at South Jersey Extended Care, Bridgeton. Her health had been slowly declining over the last several years. Born in Millville... View Obituary & Service Information

The family of Virginia L. Stevens created this Life Tributes page to make it easy to share your memories.

Send flowers to the Stevens family.