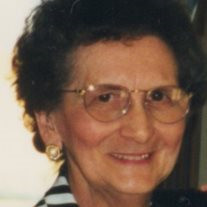 Virginia “Ginny” E. (Smith) Lambert, age 77 of Millville, passed away Tuesday morning, March 11, 2014 at home. She had been in declining health for the past year. A life long Millville resident, Ginny worked in quality control for the West Company for 32 years and retired in 1995. She was a member of the Fourth United Methodist Church of Millville, where she sang in the choir. She was also a member of the GBBA, Local No. 68, the Single Parent Society, and a 12 year member of the Singing Ambassadors of Vineland. Ginny enjoyed traveling with the Singing Ambassadors, dancing, playing golf at the Chip and Putt Course and gardening. Most of all, she enjoyed spending time with her children, grandchildren, nieces, nephews and friends. She brought joy wherever she visited and always had uplifting words. The kids always anticipated the surprise birthday card with two $1.00 bills that always arrived on time. Ginny is survived by one son Gustave “Gus” Lambert of New Jersey; four grandchildren, Jeff Lambert of Vineland, Shawn Andrews of MO, Jake Lambert and Jenna Lambert, both of Vineland; one great grandson Dalton Andrews of MO; 11 nieces and nephews; many great nieces and nephews and cousins. She was predeceased by her husband Gustave; one son Joseph Lambert; one daughter Helen Lambert; four brothers, William, Herschel, Paul and Charles Smith; and her parents, Paul B. Smith and Nettie Williams. Funeral services will be conducted at 11 a.m. on Saturday, March 15, 2014 in the Christy Funeral Home, 11 W. Broad Street, Millville. There will be a viewing on Saturday from 9 to 11 a.m. in the funeral home. Burial will be in Greenwood Memorial Park, Millville. The family requests memorial contributions to the Fourth United Methodist Church, 308 Kates Blvd, Millville, NJ 08332. Memories and expressions of sympathy for Virginia Lambert may be shared on the Obituary Tribute Wall at: www.christyfuneralservice.com.

Virginia &#8220;Ginny&#8221; E. (Smith) Lambert, age 77 of Millville, passed away Tuesday morning, March 11, 2014 at home. She had been in declining health for the past year. A life long Millville resident, Ginny worked in quality... View Obituary & Service Information

The family of Virginia E. Lambert created this Life Tributes page to make it easy to share your memories.

Send flowers to the Lambert family.