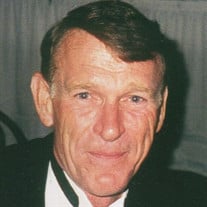 Vincent Ayars Smith, age 77 of Millville, passed away peacefully at home, Wednesday morning, March 8, 2017 surrounded by his family, after an extended illness. Born in Bridgeton to the late Raymond and Clara (Ayars) Smith, he grew up in Millville and was a life long resident. Vincent graduated from Millville High School, Class of 1958, where he received varsity letters in wrestling, football and track. He enlisted in the U. S. National Guard and served from 1961 to 1965. In 2009, Vincent retired from the Bridgeton Board of Education as the Maintenance Supervisor. He was a member of the First United Methodist Church in Millville, and the Millville Elks Lodge B.P.O.E. #580. Vincent was an avid sportsman, ranging from golfing to football to baseball to hunting, and many other sporting activities. He was a very loving husband, father and grandfather, who will be sadly missed by all who knew him. He is survived by his wife of 55 years, Beverly (Chappius); two daughters, Terri Ney (Joe) of Ocean City, and Tracey Panas (Adam) of Millville; his siblings, Shirley Levick (Wayne) of FL, Rodney Smith (Pat) of Cape May, and Vernon Smith (Pat) of Millville; five grandchildren, Mary, Christopher, Bridget and Erin, all of Ocean City, and Rileigh of Millville; his Godchild Sherrie Johnson; and many nieces and nephews. A Memorial Service will be conducted at 11 a.m. on Monday, March 13, 2017 in the Christy Funeral Home, 11 W. Broad Street, Millville. Family and friends will be received on Monday from 9 to 11 a.m. in the funeral home. Burial will be private at the convenience of the family. In lieu of flowers, the family requests memorial contributions to the Cumberland County SPCA, 1244 N. Delsea Drive, Vineland, NJ 08360 or to the Millville Elks BPOE 580 Charities, PO Box 580, Millville, NJ 08332. Memories and expressions of sympathy for Vincent A. Smith may be shared on the Obituary Tribute Wall at www.christyfuneralservice.com.

Vincent Ayars Smith, age 77 of Millville, passed away peacefully at home, Wednesday morning, March 8, 2017 surrounded by his family, after an extended illness. Born in Bridgeton to the late Raymond and Clara (Ayars) Smith, he grew up in... View Obituary & Service Information

The family of Vincent A. Smith created this Life Tributes page to make it easy to share your memories.

Send flowers to the Smith family.