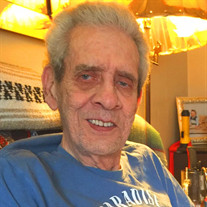 Vernon Shepherd, age 77 of Millville, passed away peacefully on Monday afternoon, June 18, 2018. Born in Millville and raised in Millville / Laurel Lake to the late Sidney and Leonilda (Feaster) Shepherd, he was a lifelong resident. Vern attended The Haleyville School and then went on to serve in the Merchant Marines. He was very proud of his service to our country. Upon his return from military service, Vern worked at Millville Launderer's and Dry Cleaners for over 15 years, and then went on to start his own trucking company, VW Trucking, which he owned and operated for several years. Vern was a lifelong die-hard Eagles fan, following the team through all of their highs and lows over the years. He was certainly delighted to be able to see his favorite team finally win the Super Bowl. A past member of the Loyal Order of the Moose, Lodge No. 434, Vern also loved fishing and enjoyed many fun-filled years of water-skiing on Laurel Lake with his family. He also enjoyed playing his handheld video games such as poker, solitaire, and blackjack. But most of all, he truly cherished the time that he was able to share with his loving family and grandkids, especially his twin grandson, Skippy. Vern will be sadly missed by his two daughters, Verna Shepherd (Skip) of Millville; Sara Shepherd of Millville; one step-daughter, Tina Congleton (Tom) and family of Villas; five brothers, Sidney, Ronald, Ovid, Johnny, and Earl; one sister, Carrielee; eight grandchildren; seven great-grandchildren; and many nieces, nephews, and cousins. He was predeceased by one brother, Raymond Ring; and one sister, Almeda Allen. Funeral Services for Vern will be conducted on Friday, June 22, 2018 at 11:00 a.m. in the Christy Funeral Home, 11 W. Broad Street, Millville. There will be a viewing from 10:00 a.m. to 11:00 a.m. in the funeral home. Burial will be in Greenwood Memorial Park, Millville. Memories and expressions of sympathy for Vernon Shepherd may be shared on the Obituary Tribute Wall at: www.christyfuneralservice.com.

Vernon Shepherd, age 77 of Millville, passed away peacefully on Monday afternoon, June 18, 2018. Born in Millville and raised in Millville / Laurel Lake to the late Sidney and Leonilda (Feaster) Shepherd, he was a lifelong resident.... View Obituary & Service Information

The family of Vernon "Vern" Shepherd created this Life Tributes page to make it easy to share your memories.

Send flowers to the Shepherd family.