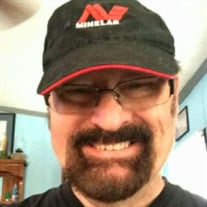 ***********The Memorial Service for Timothy Simpkins on Friday has been postponed due to the recommendation from the CDC, Governor of new Jersey and the President of the Untied States. We will keep you informed once it has been rescheduled.*********** Timothy "Tim" James Simpkins, age 66 of Millville, passed away peacefully at Inspira Medical Center in Vineland on Wednesday afternoon, March 11, 2020 after a brief illness. Born in Bridgeton and raised in Fairton to the late Arthur and Marilyn (Kalko) Simpkins, Tim graduated from Bridgeton High School, Class of 1972. He moved to Bridgeton after high school and spent the last 16 years living in Millville. Tim worked for many years as a salesman at Radio Shack in the Cumberland Mall and Bridgeton stores. He then went on to work for over 23 years as an exterminator for Terminex Termite and Pest Control, and retired. Through and through, Tim was a true car enthusiast. He was an avid collector of antique cars, loved going to car shows and was a walking encyclopedia of automotive knowledge. He treasured his two Corvairs, but his true pride and joy was "The Blue Angel," a beautiful 1973 Cadillac Coupe DeVille. Tim had a huge collection of antiques, and especially enjoyed collecting antique clocks and oil lamps. Tim had a great love for good music from groups like Chicago. At one time, he was even in a band, playing the keyboard. He also started the Bridgeton High School Chess Club when he was in high school. Tim was always fully in tune with current news and world affairs. He loved learning world history and local Fairton history as well. Gardening, freshwater fishing, and eating lasagna were also a few of Tim's favorite pastimes. He was also quite the prankster over the years, well known for his joking around with ice, silverware, and drinks. Tim will be sadly missed by his life partner, Steven M. Ambrose of Millville. Together they shared countless memories and happy times with friends, joining together in life's journey on July 2, 2019. Tim is also survived by his brother, Robert Simpkins and wife Mary Sue of Millville; step-mother Carol Price Simpkins of Fairton; his adopted sister Kimberly R. Hall; four step-brothers; one niece Bobbi Jo Swain and husband Brian of Millville; and two grand-nephews, Jared and Aiden. He was predeceased by several aunts, uncles, and cousins; and his three loving dogs, Toby, Emily, and Shelly. In lieu of flowers, donations in Tim's memory may be made to the South Jersey Regional Animal Shelter, 1244 N. Delsea Drive, Vineland, NJ 08360 or at the website: southjerseyregionalanimalshelter.org. Memories and expressions of sympathy for Timothy James Simpkins may be shared on the Obituary Tribute Wall at: www.christyfuneralservice.com.

***********The Memorial Service for Timothy Simpkins on Friday has been postponed due to the recommendation from the CDC, Governor of new Jersey and the President of the Untied States. We will keep you informed once it has been rescheduled.*********** Timothy... View Obituary & Service Information

The family of Timothy "Tim" J. Simpkins created this Life Tributes page to make it easy to share your memories.

Send flowers to the Simpkins family.