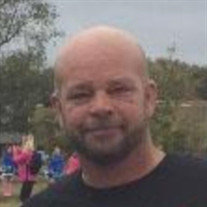 Timothy S. Cossaboon, age 55 of Pittsgrove, passed away Tuesday evening, April 12, 2022 at Inspira Medical Center, Vineland. He had been in declining health for the past two years. Born and raised in Millville to Joyce (Cox) and the late Scott Cossaboon, he graduated from Millville High School, Class of 1985. Tim started working at Wheaton Glass in Millville, and then for Comar in Newfield, before becoming a Corrections Officer 24 years ago at Southwoods State Prison in Bridgeton. He remained at Southwoods over the years, working his way up to Sergeant. He was a member of the Fourth United Methodist Church in Millville. Tim was an avid Star Wars fan "May the Force be With You." He enjoyed riding his motorcycle as a kid, traveling with his wife Tracy, going to the beach, fishing in the bay, crabbing, watching the Eagles, tinkering with his tomatoes and peppers, but most of all he loved to watch movies, play video games and go fishing in the backyard stream with his son Scott. Tim will be deeply missed by his wife Tracy (Grier) where together they would have celebrated 20 years of marriage this May; one son Scott Howard Cossaboon at home; one sister Kathy Cossaboon (Liz) of Orange, VA; his mother Joyce (Cox) Cossaboon of Millville; Aunt Nancy and Uncle Gary; sisters in law; brothers in law; many nieces, nephews and cousins; and his special friends from SWSP - Roger, Amy, David, Shep, John and Mark. He was predeceased by his father Scott Cossaboon. Funeral services will be conducted at 12 noon on Wednesday, April 20, 2022 in the Christy Funeral Home, 11 W. Broad Street, Millville. Family and friends will be received on Wednesday from 10 a.m. to 12 p.m. in the funeral home. Burial will be private at the convenience of the family. The family requests memorial contributions for an education fund for Scott H. Cossaboon. Memories and expressions of sympathy for Timothy S. Cossaboon may be shared on the Obituary Tribute Wall at www.christyfuneralservice.com.

Timothy S. Cossaboon, age 55 of Pittsgrove, passed away Tuesday evening, April 12, 2022 at Inspira Medical Center, Vineland. He had been in declining health for the past two years. Born and raised in Millville to Joyce (Cox) and the late... View Obituary & Service Information

The family of Timothy S. Cossaboon created this Life Tributes page to make it easy to share your memories.

Send flowers to the Cossaboon family.