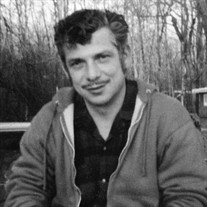 Thomas Carlisle Wallace, Jr., age 83 of Bridgeton, passed away peacefully on Friday, January 27, 2017 at Eagleview LTC in Elmer, after a lengthy illness. Born and raised in Vineland to the late Thomas Sr., and Lillian (White) Wallace, Thomas was a lifelong resident of Cumberland County. He graduated from Vineland High School and then went on to serve our country in the U.S. Navy during the Korean War. After his military service, Thomas returned to Vineland and drove a truck for Royal Crown for several years. He married Irene Capelli and had five children. Thomas then worked at T & R Lincoln Mercury and several other auto shops in the area and specialized in collision repair. He was a true expert in his field and truly enjoyed his work. He later married Blanche Stiles and had one son, David. He then left the collision repair industry and went on to work at NAPA Auto Parts in Vineland as a truck driver for 15 years, and then retired. Thomas loved to go fishing, usually with his family, in the Delaware Bay, Maurice River, Giampietro Park, and Fortescue. He was also very passionate about fixing and cleaning cars. He also enjoyed roller skating, especially at the roller rink / bowling alley near Landis Avenue and the Boulevard in Vineland. Thomas will be sadly missed by his first wife Irene Capelli of Millville, and second wife Blanche Stiles of Villas, NJ; two sons Thomas Wallace, III of Millville and David Wallace of Heislerville; three daughters Barbara Wallace of Vineland, Rose Wallace of Millville, and Irene Wallace of Millville; one brother Samuel Wallace of Vineland; one sister Marie Cuniff and husband Bill of Vineland; three step-children Wendy O'Neill, Christy Spero, and Sherry Ausburn; many grandchildren, great-grandchildren, nieces, nephews, and cousins; and good friend Joanne Pennington. He was predeceased by one daughter Judy Wallace. A graveside service with Military Honors will be held at 10 a.m. on Friday, February 3, 2017, in the Cumberland County Veterens Cemetery, Trench Road, Bridgeton. Arrangements are under the direction of Christy Funeral Home, Millville. Memories and expressions of sympathy for Thomas Carlisle Wallace, Jr. may be shared on the Obituary Tribute Wall at: www.christyfuneralservice.com.

The family of Thomas C. Wallace, Jr. created this Life Tributes page to make it easy to share your memories.