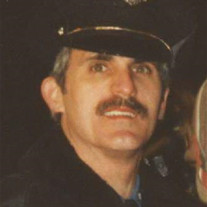 Thomas W. Riley, age 64 of Millville, passed away peacefully at home, surrounded by his loving family on Wednesday afternoon, October 17, 2018. He had been in declining health. Born in Iaeger, WV, Tom was raised by George and Lenora (Burchett) Riley, and moved to Millville at age 16. When in West Virginia, Tom was quite popular and a star football player. Tom graduated from Millville High School, Class of 1972. After high school, Tom then served our country in the U.S. Army for eight years as a Staff Sergeant E-5, serving in Germany in the 2nd Armored Cavalry Regiment at the end of the Vietnam War era. Upon returning from his military service, Tom worked briefly as a correctional officer at Leesburg State Prison, and then accepted a position with the Millville Police Department to serve as a Police officer. He moved up through the ranks over the years and served as acting police chief, before retiring after over 26 years with the department. Tom was an instrumental part of Police Youth Week in Millville, which stirred interest in countless local youth over the years, inspiring many of them to one day become police officers. Tom especially enjoyed spending time with his children and grandchildren. He was a member of the Millville American Legion Legion Nabb-Leslie Post No. 82. Tom loved going to the theater and watching movies, especially Westerns. A longtime member of the Cumberland Rifleman, Tom was an expert marksman and enjoyed teaching people how to shoot. Tom was also a die-hard Eagles fan, and also loved the West Virginia Mountaineers and Iaeger Cubs. He also enjoyed traveling to Arizona to visit his family. Tom was also quite the history buff and enjoyed watching the History Channel. Tom will be sadly missed by his loving wife of over 13 years, Phyllis; two daughters, Diane Johnson (Devin) of Scottsdale, AZ and Christina Petrichko (Kyle) of Scottsdale, AZ; adopted daughter Gina Nicole Riley of Salt Lake City, UT; three step-children, Prudence Smaniotto (Dave) of Vineland, Peter Simpkins (Mafhel) of Georgia, and Courtnia Turner (Mike) of Georgia; three brothers, Donnie Riley (Maggie) of Vineland, David Riley of Vineland, and Steve Vaught; six sisters, Phyllis Rowland of Millville, Jennifer Owens of Millville, Lisa Burgess (Daniel) of Millville, Susan Turley, Cheryl Sheets (Stephen), Carol Slusher(Steve); two grandchildren, Charlotte and Libby Johnson; seven step-grandchildren, Stephen and Tyler Kubiak of Vineland, Tripp & Tatum, Aaron, Arielle, & Arriane; and many nieces, nephews, and cousins. He was predeceased by his father, George Riley; one brother Gerald Brown Vaught and one step-grandchild, Zoey. Funeral Services for Tom will be held on Monday, October 22, 2018 at 11:00 a.m. in the Christy Funeral Home, 11 W. Broad Street, Millville. Family and friends are invited to call from 9:00 a.m. to 11:00 a.m. in the funeral home. Burial will be in Mt. Pleasant Cemetery, Millville. In lieu of flowers, the family requests memorial contributions in Tom's name be made to St. Jude Children's Research Hospital, 501 St. Jude Place, Memphis, TN 38105 or at the website, www.stjude.org. Memories and expressions of sympathy for Thomas W. Riley may be shared on the Obituary Tribute Wall at: www.christyfuneralservice.com.

Thomas W. Riley, age 64 of Millville, passed away peacefully at home, surrounded by his loving family on Wednesday afternoon, October 17, 2018. He had been in declining health. Born in Iaeger, WV, Tom was raised by George and Lenora (Burchett)... View Obituary & Service Information

The family of Thomas W. Riley created this Life Tributes page to make it easy to share your memories.

Send flowers to the Riley family.