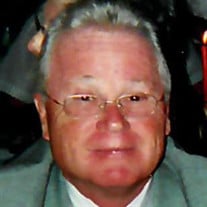 Thomas G. Cox, age 76 of Bridgeton, passed away Wednesday, October 5, 2016. Born and raised in Millville to the late John Cox Sr. and Marie Sites, Thomas graduated from Millville High School, class of 1959. He began working at Wheaton Glass Co. at the age of 18, and in 1963 he was drafted by the U.S. Army and served during the Vietnam War. He was an 82nd Airborne Paratrooper. He then returned to Millville and continued working at Wheaton Glass Co. as a Sampling Foreman for a total of 43 years, retiring in 2002. Thomas was a member of the American Legion Nabb-Leslie, Post No. 82, and the Veterans of Foreign Wars Bush-Kerrick, Post No. 2169, both of Millville. He was an avid NASCAR fan, and he enjoyed crabbing, fishing and hunting. In his earlier days, he was a bicyclist, and enjoyed riding with his brother and best friend Larry, traveling to different areas of the U.S. Thomas was a health enthusiast. He loved all, and would do anything for anybody. He truly loved his family, especially his grandchildren and great grandchildren. Thomas will be sadly missed by his wife of 25 years, Louise (Sisco); his children, Robert Cox of Millville, Sherry Russo and husband James of Deerfield, Karen Campbell and husband Scott of Upper Deerfield, Tony Benedetto and wife Liz of W. VA, Scott Etherton and wife Diana of Hopewell, Brett Etherton and wife Sue of Upper Deerfield, and Kristi Etherton of Upper Deerfield; his siblings, Joan Banks, Lawrence Cox, and William Cox, all of Millville; and many nieces and nephews. He was predeceased by one brother John Cox Jr.; and one nephew Brian Cox. Private graveside services will be at the convenience of the family. Arrangements are under the direction of Christy Funeral Home, Millville. In lieu of flowers, the family requests memorial contributions to the Wounded Warrior Project, PO Box 758516, Topeka, KS 66675.

The family of Thomas G. Cox created this Life Tributes page to make it easy to share your memories.

Send flowers to the Cox family.