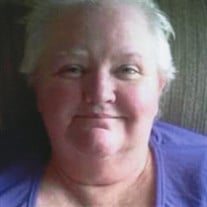 Therese A. (Corrigan) Larcombe, age 61 of Millville, passed away unexpectedly Saturday afternoon, January 5, 2019 at Inspira Medical Center, Vineland after a brief illness. Therese was born in Philadelphia, PA to the late Vincent and Agnes Corrigan, and graduated from St. Joan of Arc High School in PA. She began working for the Philadelphia Union League as a waitress, which lasted about eight years. During that time she and her family enjoyed summering at the Jersey Shore, where she met her husband John. In 1984 she married and moved to Woodbine to raise her family. Years later, she moved to Millville. For five years she worked as a cafeteria worker for Dennis Twp. School District. For the next 30 years she worked as the Supervisor of Registration for Outdoor World, Lake and Shore Resort in Ocean View, retiring in 2012. Therese was a member of the Chestnut Assembly of God Church in Vineland, and her favorite pastime was spending time with her family. Therese is survive by her husband of 34 years, John A. Larcombe Sr.; two sons, John A. Larcombe Jr. and wife Alicia of Woodbine, and Vincent W. Larcombe of Millville; one daughter Shannon Larcombe of Millville; one sister Sarah Jane Schriver of Philadelphia, PA; and many nieces and nephews. She was predeceased by her siblings, Mary Ann Corrigan, Patrick Corrigan, and Charles Corrigan. The family requests memorial contributions to the American Diabetes Association, PO Box 15829, Arlington, VA 22215. A Memorial Service will be conducted at 3 p.m. on Saturday, January 19, 2019 at the Chestnut Assembly of God Church, 2554 East Chestnut Ave., Vineland.

The family of Therese A. Larcombe created this Life Tributes page to make it easy to share your memories.

Therese A. (Corrigan) Larcombe, age 61 of Millville, passed away...

Send flowers to the Larcombe family.