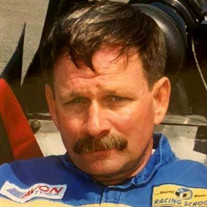 "Was your head with you all day today??"   Terry "TR" Robert Zeller, Sr., age 70 of Millville, passed away peacefully on February 15, 2020 at Inspira Medical Center in Vineland, surrounded by his loving family, after an extended illness.   Born and raised in Baltimore, MD to the late Robert and Doris (McCubbin) Zeller, TR graduated from Patapsco High School, Class of 1967.  He went on to serve our country in the United States Coast Guard as an instructor.   Upon completing his military service in 1971, TR settled in Millville, where he and his wife, Ruth, raised their family.   TR worked as a plant superintendent at Hanson Aggregate Co. for over 35 years, retiring in 2009.   TR graduated from the Doug Foley Drag Racing School in 2002 alongside his daughter Kim.   He truly loved every aspect of motorsports and enjoyed volunteering in many ways.  He worked as a flagger at the NJ Motorsports Park and also volunteered with Webteams LLC Pit Note Reporting for the United Sportscar Series and worked many autograph sessions with the Corvette race team.  He was a Corvette enthusiast and was a longtime member of Corvettes Unlimited in Vineland, where he served as president for five years.   TR was a an avid hunter and expert marksman; he was the #1 shooter in field pistol silhouette shooting in NJ and ranked #5 in the world in field pistol.  He was a certified dive master, even diving on the famous wreck of the Andrea Doria off the coast of Nantucket.   A jack of all trades, TR was truly a genius of many; there was no skill the he could not learn and master.  They were not hobbies, he truly turned them into skills that he mastered that were extremely useful and practical.  There was nothing that he was ever afraid of trying, and he truly lived his life to the absolute fullest. Mountain climbing, parasailing adventures, skydiving, water skiing, deep sea diving, reading, and fishing on the Delaware Bay at night for Drum were but a few of TR's favorite pastimes.  He was also a skilled sheet metal fabricator and certified iron worker.  TR even trained seeing eye dogs and was proud to spend several years volunteering at the Camden Aquarium, running the shark show.   TR had a deep knowledge of how to fix just about everything. His family and friends knew this well and were always asking for his advice and help on a wide range of projects and things that needed repairing.  He was always willing to lend a hand to whoever needed it.  And he was always there for his family too, and truly cherished all of the time and countless special memories that he was able to share with them over the years.   TR will be sadly missed by his wife of over 43 years, Ruth (Tice) Zeller of Millville; three sons, Jack Zeller and wife Maryetta of Leesburg, Edward Zeller and wife Susan of Cedarville, and Terry Zeller, Jr. and wife Maria of Millville; one daughter Kim Zeller and husband Bob Roe of Millville; two brothers, Matthew Zeller and wife Donna of PA and Timothy Zeller and wife Cindy of PA; three sisters, Susan Chalk of Dundalk, MD, Linda Stratton and husband Ken of Port Deposit, MD, and Jennifer Morris and husband Ken of Baltimore; seven grandchildren, Justin, Byrd, Jacob, Helana, Angie, Travis, and AJ; six great-grandchildren, Katie, Hayden, Zoie, Leia, JJ, and Bryce; best friend Kerry Stewart of Millville; many nieces, nephews, and cousins; and his loving Pug, Maggie.  He was predeceased by one sister Michele Zeller.   A Funeral Service for TR will be conducted on Saturday, February 22, 2020 at 11:00 a.m. in the Christy Funeral Home, 11 W. Broad Street, Millville.  Family and friends will be received from 10 to 11 a.m. in the funeral home.  Burial will be in the Cumberland County Veterans Cemetery, Bridgeton.   In lieu of flowers, memorial contributions in TR's memory may be made to Spirit and Truth Ministries, PO Box 89, Vineland, NJ 08360.   Memories and expressions of sympathy for Terry Robert Zeller, Sr. may be shared on the Obituary Tribute Wall at: www.christyfuneralservice.com.

"Was your head with you all day today??"   Terry "TR" Robert Zeller, Sr., age 70 of Millville, passed away peacefully on February 15, 2020 at Inspira Medical Center in Vineland, surrounded by his loving family, after an extended illness.... View Obituary & Service Information

The family of Terry "TR" Robert Zeller, Sr. created this Life Tributes page to make it easy to share your memories.