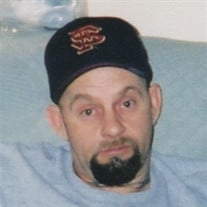 Stanley Michael Hunter, age 52 of Millville, passed away Saturday morning, May 17, 2014 at Inspira Medical Center, Vineland after a lengthy illness. Born and raised in Millville, he attended Millville Public Schools, and was a life long resident. For many years Mr. Hunter worked in the maintenance department for Walmart in Millville. He loved fishing, hunting, camping and riding his motorcycle, especially with his family. Mr. Hunter is survived by his companion Helen of Millville; his mother Grace (Seeds) Hunter of Millville; four daughters, Kimberly Sheppard and husband Brian of Vineland, Heidi Harvey of Millville, Melissa Hunter of Millville, and Grace Hunter of Laurel Lake; one sister Kim Hollenweger and husband Oscar of Millville; three brothers, John Hunter Jr. and wife Ilene of Millville, James Hunter and wife Belinda of Monroeville, and Robert Hunter and wife Susan of Millville; 11 grandchildren; and many nieces and nephews. He was predeceased by his father John L. Hunter Sr.; and four brothers, Bryant, Ralph “Yamo,” Jack and Irving. A memorial service will be conducted at 3 p.m. on Wednesday, May 21, 2014 in the Christy Funeral Home, 11 W. Broad Street, Millville. Family and friends will be received on Wednesday from 1 to 3 p.m. in the funeral home. Burial will be private at a later date. The family requests memorial contributions to be made to the Millville Church of the Nazarene, 2201 E. Main Street, Millville, NJ 08332. Memories and expressions of sympathy for Stanley Michael Hunter may be shared on the Obituary Tribute Wall at: www.christyfuneralservice.com.

Stanley Michael Hunter, age 52 of Millville, passed away Saturday morning, May 17, 2014 at Inspira Medical Center, Vineland after a lengthy illness. Born and raised in Millville, he attended Millville Public Schools, and was a life... View Obituary & Service Information

The family of Stanley Michael Hunter created this Life Tributes page to make it easy to share your memories.

Send flowers to the Hunter family.