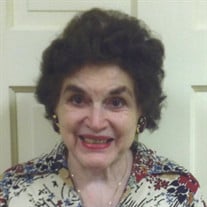 Shirley "Sherry" R. Parker (nee Shirley Waterman), wife of the late Paul C. Parker, died on Sunday, January 28, 2018 at the age of 89. She was the stepmother of JoAnn Walsh (John), Paula McGuigan (Frank) and Jonathan Parker (Debbie). Daughter of the late Sherwood and Billie Waterman, she is survived by her sister, Sandie Springer and two nephews. Sherry was the sister-in-law of Lois Barber of Millville, and aunt to all of the Barber children and grandchildren. Through her marriage to Paul, Sherry was the grandmother of six, and also the great-grandmother of nine. A major contributor to the SPCA, Sherry loved her dogs from a span of 55 years: Toby, Tawny, Tory, Raven, Tony, Mark, Luke, and Scochie. Sherry was born in Springfield, PA in 1928. She was a graduate of Springfield High School, Class of 1945. After high school, she was trained by and worked for the Weather Bureau in both Newark and Washington D.C. Eventually, Sherry became a stewardess for American Airlines. Later, Sherry joined TransOcean Airlines where she was stationed in Hawaii, Japan and Wake Island. Sherry eventually retired as a flight attendant returning home to write "From Another Island" a book about her experiences as a stewardess. After the publication of her book, Sherry began a new phase of her life as a reporter's wife. Sherry and Paul lived for many years in Tinton Falls, NJ to be close to Paul's work at WINS NewsRadio in New York City. Activities included entertaining, flying in their own antique planes and boating. In 2001 they moved to South Jersey. Throughout her life, Sherry maintained the friendships she had formed during her flying years. She was an inveterate writer of letters and frequent contributor to the TransOcean newsletter. Sherry also belonged to the KIWI's, an organization of retired TransOcean stewardesses. Sherry loved reading biographies and watching football. Helping others through volunteering, donating or hiring, Sherry contributed to many worthy causes. Family and friends may visit from 10 to 11 a.m. on Friday, February 2, 2018 at the Christy Funeral Home, 11 W. Broad St., Millville, where services will begin at 11 a.m. Burial will be private at the convenience of the family. In lieu of flowers, memorial contributions may be made to the Cumberland County SPCA, 1244 N. Delsea Dr., Vineland, NJ 08360. Loving memories of Shirley Parker can be shared by visiting www.christyfuneralservice.com.

The family of Shirley R. Parker created this Life Tributes page to make it easy to share your memories.

Send flowers to the Parker family.