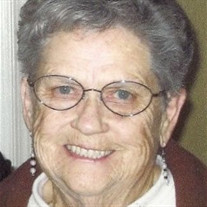 Shirley R. (Smith) Jargowsky - Commander, age 78 of Las Vegas, NV, passed away Saturday, August 2, 2014 in Mountain View Hospital, Las Vegas, NV after an extended illness. Born in Millville, she was a Millville High School graduate. She had worked for Sheppard Box Co. for several years before marrying her first husband Ken Jargowsky and starting her family. Upon becoming widowed, she married Jim Commander and moved to Las Vegas, NV where they raised their six sons. She was a former member of St. Mary Magdalen Roman Catholic Church of Millville. A homemaker, she loved to bake and cook. One of her favorite family pastimes was camping. She was a NASCAR fan; her favorite drivers were Ricard Petty and Dale Earnhardt. She is survived by her husband of 48 years, Philip “Jim” Commander of Las Vegas, NV; five sons, John Jargowsky of Las Vegas, NV, Todd (Diane) Jargowsky of FL, James (Brenda) Commander of Maine, and Jeff Commander and Jock Commander, both of NC; her daughter-in-law Debra Jargowsky of Flower Mound, TX; two brothers, Jesse (Irene) Smith of Fairton and Gary Smith of Las Vegas, NV; an Aunt Phyllis Jacoby of Minatola; six grandchildren; and six great-grandchildren. She was predeceased by her parents, Jesse and Ethel K. (Allen) Smith; her first husband Ken Jargowsky, Sr. and her son Ken Jargowsky, Jr. Funeral services will be conducted on Thursday, August 14, at 11 a.m. in the Christy Funeral Home, 11 W. Broad St., Millville. There will be a viewing in the funeral home from 9 to 11 a.m. Burial will be in Holy Cross Cemetery, Millville. Memories and expressions of sympathy for Shirley may be shared on the Obituary Tribute Wall at: Christyfuneralservice.com.

The family of Mrs. Shirley R. Commander created this Life Tributes page to make it easy to share your memories.

Send flowers to the Commander family.