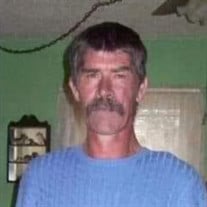 Sherman Douglas Pusey, affectionately known as "Shermanator," age 61 of Laurel Lake, passed away peacefully on Monday, November 1, 2021 at Lincoln Specialty Care Center in Vineland. He had been in declining health over the last several months. Sherman was born in Millville to the late William and Evelyn (Chance) Pusey and raised in Delmont. He attended school in Millville. Sherman was a true to life "jack of all trades." He was self employed and worked for many area roofing and landscaping contractors over the years. Sherman loved his family very much and enjoyed countless BBQ's over the years, complete with playing horseshoes and relaxing by the firepit. Camping with his family, riding his bike all around Laurel Lake, and living the simple life just keeping to himself were a few of Sherman's favorite pastimes. Most of all, Sherman treasured the time that he was able to share with his family, especially his grandchildren. Sherman will be sadly missed by his loving wife of over 25 years, Jacqueline "Jackie" (Blizzard) Pusey of Laurel Lake; his three daughters, Evelyn "Marcie" Jefferson (Angel) of Blackwood, Mary M. Jefferson-Parr (Ron) of Millville, and Jennifer Jefferson (Raymond) of Laurel Lake; ten grandchildren, Mike, Stephanie, Julian, Sebastian, Arianna, Brooklyn, Xavier, Brayden, Faith, and Tyler; four great-grandchildren, Tyler Jr. "TJ," Leila, Jackson, and Brinley; two sisters, Carol Hickman (Gary) of Laurel Lake and Golda Gifford of Florida; two brothers, Donald Pusey (Dana) and Joe Robinson; many nieces, nephews, and cousins; his best friends, Ed Gannon, Richard and Patti Turner, Jason Derby, and Kenny Archie; Oscar the dog; and Mirakle the cat. He was predeceased by his two brothers, David and Bill Pusey. Funeral Services for Sherman will be private at the convenience of the family. Arrangements are under the direction of the Christy Funeral Home, Millville. In loving memory of Sherman, memorial contributions may be made to the Laurel Lake Volunteer Fire and Rescue Company, 5436 Battle Lane, Millville, NJ 08332. Memories and expressions of sympathy for Sherman Douglas Pusey may be shared on the Obituary Tribute Wall at: www.christyfuneralservice.com.

Sherman Douglas Pusey, affectionately known as "Shermanator," age 61 of Laurel Lake, passed away peacefully on Monday, November 1, 2021 at Lincoln Specialty Care Center in Vineland. He had been in declining health over the last several months.... View Obituary & Service Information

The family of Sherman D. Pusey created this Life Tributes page to make it easy to share your memories.

Send flowers to the Pusey family.