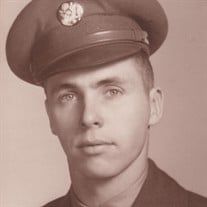 Samuel Robert Alcorn Sr., age 83 of Millville, passed away, Thursday evening, March 31, 2016 at Inspira Medical Center, Vineland. He had been in declining health for the past four years. Born in Millville to the late William and Isabell (Osborne) Alcorn, he grew up in Port Norris, and graduated from Millville High School. He then served two years in the U.S. Army during the Korean War. For 34 years, Mr. Alcorn worked at St. Mary Magdalen Roman Catholic Church as the Head Maintenance Man and retired. He was also a member of the church. Mr. Alcorn played varsity baseball for four years in High School, and he played in the Oyster League in Port Norris. He was an avid Phillies fan, and he enjoyed fishing in Fortescue, but most recently he could be found sitting on his front porch. Mr. Alcorn will be sadly missed by his wife of 62 years, Gertrude (Jurick); seven children, Samuel Alcorn Jr. and wife Susan of Webster, NY, twins, Theresa Alcorn of Audubon and Catherine Alcorn of Cherry Hill, Bill Alcorn and wife Gina of Millville, Anne Marie DiMaria and husband Rocky of Lawrence Twp., and twins Ellen Alcorn of Millville and Andy Alcorn and wife Kim of Millville; his dedicated brother Burt Alcorn of Millville; and seven grandchildren, Josh Alcorn, Benjamin Dunn, Andrew Alcorn, Dylan Alcorn, Lauren Alcorn, Mitch Alcorn and Leah Alcorn. He was predeceased by his siblings, Bill, Flo, Nora and Minerva. A Mass of Christian Burial will be celebrated at 11 a.m. on Friday, April 8, 2016 in The Parish Of All Saints, Buck and Depot Streets, Millville. There will be a viewing on Friday from 9 to 10:45 a.m. in the Christy Funeral Home, 11 W. Broad Street., Millville. Burial will be in Holy Cross Cemetery, Millville. The family requests memorial contributions to The Parish of All Saints, 621 Dock Street, Millville, NJ 08332. Memories and expressions of sympathy for Samuel R. Alcorn Sr. may be shared on the Obituary Tribute Wall at www.christyfuneralservice.com.

Samuel Robert Alcorn Sr., age 83 of Millville, passed away, Thursday evening, March 31, 2016 at Inspira Medical Center, Vineland. He had been in declining health for the past four years. Born in Millville to the late William and Isabell... View Obituary & Service Information

The family of Samuel Robert Alcorn Sr. created this Life Tributes page to make it easy to share your memories.