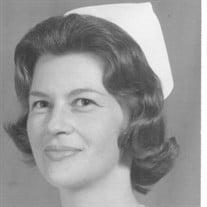 Sally Anne (Kalko) Sheets, age 84 of Malaga Camp, and formerly of Millville, passed away, Thursday morning, May 23, 2019 at Inspira Medical Center, Vineland. Born in Chambersburg, she and her family moved to Millville when Sally was two years old. She attended Millville Memorial High School and lived in Millville until 1955. Sally married in 1952, moved to Heislerville in 1953, and moved back to Millville in 1966. She graduated first in her class with top honors when she received her LPN. She began her nursing career as an LPN for the Woodbine State Colony on the same day as J.F.K's assassination in 1963. Then she worked in the ER for Burdette Tomlin Hospital for a year. In 1966, she spent the next 28 years working for Millville Hospital. During that time she graduated from Cumberland County College with her RN in 1974. She worked in maternity, and served as Supervisor of the Maternity Ward. Later she worked in Pediatrics, as well as most areas of the hospital, retiring in 1993 on a disability. She was known as "the nurse with a cap." Sally was currently the longest member of the First Assembly of God Church (Gospel Lighthouse) in Millville. She was married in the church, and had sung in a Ladies Trio with her mother and sister. She was the Co-superintendent of the SS-Church Nursery, a member of the Ladies Bible Class and related events, a food provider for repast dinners, and a member of the Seniors 4 Life At network group. She enjoyed crocheting, doing crossword puzzles, cruising with her late husband, and she loved her pets. Sally will be sadly missed by her daughter Bonnie Kruch and husband Steven of Townsend, DE; son Raymond Sheets Jr. and wife Sarah of Malaga Camp; seven grandchildren, Mia Bass and husband Shaun, Sarah Damron and husband John, Jason Brown and wife Bobbie Jo, Christopher Brown and wife Lisa, Wesley Sheets, C.J. Sheldon, and Patricia Dillon; ten great grandchildren, Delanie, Ethan Victoria, Sophia, Alex, Christopher Jr. Johnny, Cassie, Derrec and Carl David; two special aunts, Jane Lewis-Hall, and Evelyn Kelly; her special niece Kay Burkett; and two special nephews, Robert Simpkins and wife Sue, and Timothy Simpkins. She was predeceased by her husband Raymond Sheets Sr. in 2012; one daughter Terri Sheldon in 2007; her father Steven Kalko; and her mother and step father Betty (Lewis) and her husband Harry Lord, and one sister Marilynn Simpkins, all on the same day. Funeral services will be conducted at 12 noon on Thursday, May 30, 2019 in the Christy Funeral Home, 11 W. Broad Street, Millville. Family and friends will be received on Thursday from 11 a.m. to 12 p.m. in the funeral home. Burial will be in Greenwood Memorial Park, Millville. In lieu of flowers, the family requests memorial contributions to AGWM, 1445 N Boonville Ave., Springfield, MO 65802. Please write 'Timothy's Abode 20056 Class 60' on the memo line, and write on a piece of paper attached to the check "Memorial gift in honor of Sally Sheets," or https://s1.ag.org/timothysabode Memories and expressions of sympathy for Sally Anne Sheets can be sent to www.christyfuneralservice.com.

Sally Anne (Kalko) Sheets, age 84 of Malaga Camp, and formerly of Millville, passed away, Thursday morning, May 23, 2019 at Inspira Medical Center, Vineland. Born in Chambersburg, she and her family moved to Millville when Sally was two... View Obituary & Service Information

The family of Sally Anne Sheets created this Life Tributes page to make it easy to share your memories.

Send flowers to the Sheets family.