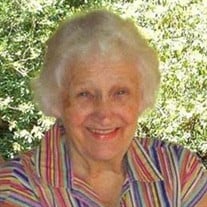 Ruth (Gifford) Stowe, age 88 of Millville, passed away peacefully at home, surrounded by her loving family, on Thursday morning, March 26, 2020. She had been in declining health over the last year. A longtime Millville resident, Ruth was born in Dennis Township and raised in Belleplain to the late Oliver and Millicent (Peterson) Gifford, and attended high school in Cape May Court House. Ruth met her late husband Walter on a blind date at the Levoy Theatre in 1949, and together they shared 52 years of marriage. Ruth worked briefly at Wheaton Glass Company in Millville as a detailer, and then returned home to raise her family. Once she was able, Ruth worked many jobs in the clothing manufacturing industry in the Millville area, but her main focus was always on lovingly raising her family. Ruth was well known for putting on the best yard sale in Millville several times a year. Ruth loved to go camping, and enjoyed many special family camping trips over the years. She also loved her word searches and in her earlier years enjoyed roller skating. Crocheting, knitting, and sewing were but a few of Ruth's other favorite pastimes. Most of all, Ruth treasured the time that she was able to share with her family, especially the countless large family gatherings over the years, Thanksgiving in particular was so special to her. Ruth will be sadly missed by her two sons, Walter Stowe III and wife Susan (Wright) of Millville and Michael Stowe and wife Bea of Millville; two daughters, Terry Eagle and husband Gary, Sr. of Millville and Dorothy Lotz of Myrtle Beach, SC; one sister Edna Pennello of Tuckahoe; ten grandchildren, Kim Priestley, Tracey Schalek, Robin Benfield, Chris Stowe, Jeremiah Stowe, Stephen Stowe, Gary Eagle, Jr., Christina Reeves, Michael Stowe, Jr., and Brittany Mason; 22 great grandchildren; two great-great grandchildren; two sisters-in-law, Ogee Gifford and Emma Hannah; two brothers-in-law, Albert Stowe, Sr. and wife Betty, and James Hannah; many nieces, nephews, and cousins; and her beloved Australian Terrier, Max. She was predeceased by her late husband, Walter Stowe, Jr.; three brothers, Walter Gifford, John Gifford, and Norman Gifford; four sisters, Dot Lloyd, Viv Lloyd, Marie Lawless, and Pat Blizzard; and one special son-in-law who just recently passed away, Jerry Lotz. With the utmost care and concern for our families and friends during this pandemic, Funeral Services for Ruth will be private. In Lieu of flowers, contributions in Ruth's memory may be made to Bayada at Inspira Hospice, 603 North Broad Street, Suite 301, Woodbury, NJ 08096. Memories and expressions of sympathy for Ruth Stowe may be shared on the Obituary Tribute Wall at: www.christyfuneralservice.com.

Ruth (Gifford) Stowe, age 88 of Millville, passed away peacefully at home, surrounded by her loving family, on Thursday morning, March 26, 2020. She had been in declining health over the last year. A longtime Millville resident, Ruth was... View Obituary & Service Information

The family of Ruth Stowe created this Life Tributes page to make it easy to share your memories.

Send flowers to the Stowe family.