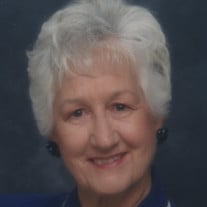 Ruth (Chambers) Page, age 96 of Millville, passed away Tuesday evening, August 22, 2017 at the Millville Center. Ruth was predeceased by her husband Robert James Page in 2010. Ruth is the mother of seven children; David Page (Patsy), Alan Page, Jeff Page (Sandra), Barbara Page, Larry Page, Nancy Page Shelton, and Donald Page (Nick Virgilio). She is the grandmother of ten; great grandmother of 16; and great great grandmother of two. She was also predeceased by her sister Helen Gunning. Born in Atlantic City to the late Lawrence and Arlene (Burnaford) Chambers, she grew up in Moorestown and graduated from Moorestown High School. She then attended Camden Commercial School which was a secretarial school, and soon met her husband Robert Page. She worked for Camden Fire Ins. Co. before the war began. She then became a homemaker and raised her family, before returning to work for Prudential Insurance in Millville for seven years prior to her retirement. Ruth was a former member of the Second United Methodist Church in Millville. She enjoyed watching Lawrence Welk nightly after dinner, and working on needlepoint and crochet projects. Watching the Eagles play football, going camping, spending time at the shore, and listening to the old classics and gospel music were her favorite things to do. She also enjoyed spending her winter months in Ft. Myers, FL, and her summer months in Cape May. Funeral services will be conducted at 11:30 a.m. on Monday, August 28, 2017 in the Christy Funeral Home, 11 W. Broad Street, Millville. Family and friends will be received on Monday from 10:30 to 11:30 a.m. in the funeral home. Burial will be in Greenwood Memorial Park, Millville. Memories and expressions of sympathy for Ruth Page may be shared on the Obituary Tribute Wall at www.christyfuneralservice.com.

The family of Ruth Page created this Life Tributes page to make it easy to share your memories.

Send flowers to the Page family.