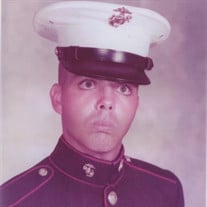 Russell Walter Losaw Sr., age 60 of Cedarville, died suddenly Thursday evening, November 12, 2015 at Cooper University Hospital, Camden. Born in Easton, PA, Mr. Losaw was raised in Phillipsburg and graduated from Phillipsburg High School. He then enlisted in the United States Marine Corps. and served three years during the Vietnam War as a Baker and a Sergeant. In 1977, Mr. Losaw moved to Millville and worked as a Foreman for Kerr Glass for over 25 years, and retired from Ball-Foster. He then worked for Leone's in Bridgeton for over ten years in the packing house. For the past eight years, he worked at Inspira Health Network as a Communications Specialist. Mr. Losaw enjoyed photography, and he was a car enthusiast. He was always proud to be a life long Marine. He was a member of the Wesley Methodist Church in Phillipsburg. Mr. Losaw will be sadly missed by his wife of 23 years Karen (Beck); his children, Russell Losaw Jr. of Sewell, Chad Losaw and wife Angie of Millville, Brian Camander of Clayton, Adam Camander of Phillipsburg, Melissa Gandy and husband Ed of Millville, and Stacy Storozuk and husband Mike of Millville; two sisters, Linda Stannard and husband Art of Phillipsburg, and Kay Truchan and husband Michael of Bethlehem, PA; eight grandchildren; one great granddaughter; many nieces, nephews and cousins; and his beloved dog Coal. He was predeceased by his parents, Raymond Walter Losaw Sr. and Flora Nemeth; one sister Margaret Price; and one brother Raymond Losaw. Funeral services will be conducted at 11 a.m. on Wednesday, November 18, 2015 at the Fairton Christian Center, 199 Fairton-Millville Rd., Fairton. There will be a viewing on Wednesday from 9 to 11 a.m. in the church. Burial will be in the Cumberland County Veteran's Cemetery, Trench Road, Bridgeton. The family requests memorial contributions to the American Cancer Society, 1851 Old Cuthbert Road, Cherry Hill, NJ 08034 or to the Wounded Warrior Project, PO Box 758517, Topeka, KS 66675. Arrangements are under the direction of Christy Funeral Home, Millville. Memories and expressions of sympathy for Russell W. Losaw Sr. may be shared on the Obituary Tribute Wall at www.christyfuneralservice.com.

The family of Russell Walter Losaw Sr. created this Life Tributes page to make it easy to share your memories.