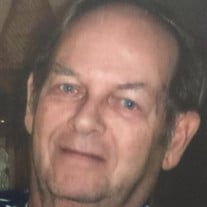 Russell D. King Sr. age 77 of Gray, TN, and formerly of Millville, passed away Sunday, March 8, 2015 in Kingsport, TN after a brief illness. He was born January 12, 1938 in Philadelphia, PA and relocated to Millville as a child with his parents, the late Russell E. and Roma King. Russell was employed at Armstrong Cork Co. where he met his wife, the late Willa June King. They have three children; Russell D. King Jr. of Franklinville, Judy L. King of Vineland, and Christine Burlew of Millville. Russell retired after 20 years of service from The West Co. of Millville as a Maintenance Mechanic and Stationary Engineer. He was also a licensed Electrician, and he also worked for Manischewitz Food Products of Vineland for five years as a boiler operator until he relocated to TN, where he met Sharon Clark, his wife of five wonderful years. He was a graduate of Millville High School, where he played football and continued to follow the Thunderbolts throughout his life. He was a Philadelphia Eagles and Tennessee Vols fan. Russell enjoyed fishing and traveling, and taking trips to the casinos and visiting his children in NJ. He was a devoted husband, father, grandfather and friend to all. It was often said, he never met a stranger. Russell enjoyed meeting and talking with people everywhere he traveled. Russell is survived by his wife Sharon (Clark); his children, Russell, Judy and Christine; his grandchildren, Kimberly A. King and her fiancé Phillip Booker, Sara Jones and Josh Jones all of TN, Desiree Burlew, Aimee Burlew, and James John Burlew Jr., all of NJ; great grandchildren, Brodie W. Ray of TN, and Craig Farside of NJ; his sister Judith Hoffman of FL; son in law James Burlew Sr.; special family friends Wendy Schmitt and John Del Vicario; many nieces and nephews; and his beloved dog Sandy. He was predeceased by his parents; first wife June, sister Ruth Yuhas; brother Richard King; step daughter Carrie Jones; daughter in law Tammy C. King; and brother in law Wayne Hoffman. Funeral services will be conducted at 11 a.m. on Monday, March 16, 2015 in the Christy Funeral Home, 11 W. Broad Street, Millville. There will be a viewing on Monday from 10 to 11 a.m. in the funeral home. Burial will be in Mt. Pleasant Cemetery, Millville. Memories and expressions of sympathy for Russell King Sr. may be shared on the Obituary Tribute Wall at: www.Christyfuneralservice.com.

Russell D. King Sr. age 77 of Gray, TN, and formerly of Millville, passed away Sunday, March 8, 2015 in Kingsport, TN after a brief illness. He was born January 12, 1938 in Philadelphia, PA and relocated to Millville as a child with his... View Obituary & Service Information

The family of Russell D. King Sr. created this Life Tributes page to make it easy to share your memories.

Send flowers to the King family.