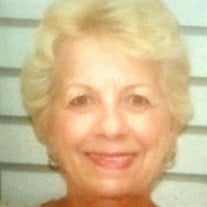 Rosemary Elizabeth (Helget) Romanik, age 72 of Millville, passed away peacefully on Friday, May 25, 2018 at Inspira Medical Center, Vineland. She had been in declining health during the last few months. Born in Camden to the late William Anton and Katherine Ann (Rohm) Helget, Rosemary was raised in Upper Pittsgrove. Rosemary graduated from Woodstown High School, Class of 1964, she married and moved to Millville. She attended casino school, and then began a long and successful career of over 35 years working primarily as a blackjack dealer as well as roulette; first at the Sands and then at Caesars casinos in Atlantic City, retiring in 2014. Rosemary always had a smile and was a very likable and social person, making friends wherever she went. She especially enjoyed going to bingo, usually at St. John Bosco, which is where she met many of her friends over the years. She loved being outdoors, whether it was working in her gardens and fish pond, or attending the many family picnics and gatherings over the years. Family meant the world to Rosemary, and she treasured all of the time that she was able to share with them, especially during the holidays. Rosemary will be sadly missed by her son, Mike Romanik, Jr. of Millville; and two sisters, Kaaran Caltabiano of Upper Pittsgrove and Kathleen Patane of Mullica Hill. She was predeceased by her son, Mark Romanik; and her two bothers, Billy and Bobby Helget. Services for Rosemary will be private at the convenience of the family. Arrangements are under the direction of the Christy Funeral Home, Millville. The family requests that donations in memory of Rosemary be made to the American Cancer Society, 1851 Old Cuthbert Road, Cherry Hill, NJ 08034. Memories and expressions of sympathy for Rosemary Elizabeth Romanik may be shared on the Obituary Tribute Wall at www.christyfuneralservice.com.

Rosemary Elizabeth (Helget) Romanik, age 72 of Millville, passed away peacefully on Friday, May 25, 2018 at Inspira Medical Center, Vineland. She had been in declining health during the last few months. Born in Camden to the late William... View Obituary & Service Information

The family of Rosemary E. Romanik created this Life Tributes page to make it easy to share your memories.

Send flowers to the Romanik family.