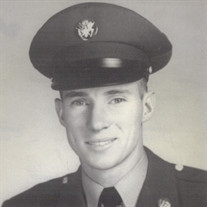 Ronald "Ron" Nicholas Spiels, age 81 of Millville, passed away peacefully at home, surrounded by his loving family, early Thursday morning, June 7, 2018, after a brief illness. Born in Philadelphia to the late Nicholas and Sara (McCafferty) Spiels, Ron moved to Millville at age seven, and was a lifelong resident. Ron graduated from Millville High School, Class of 1954, where he played football, basketball, and track and then went on to serve our country as a code cracker in the US Army in 1958. He went through basic training at Fort Dix, NJ and Signal Corps training at Fort Gordon in Georgia. He was assigned to Company D, 35th Signal Corp. Battalion and later Company D of the 65th Army Security Agency Battalion, US Army Reserve. He received his honorable discharge in 1964. Upon his return from the Army, Ron also earned his associates degree from Cumberland County College in 1964. Ron married his high school sweetheart, Miriam (Mimi) DeTora on September 29, 1956. He and Mimi were married in the First Presbyterian Church on Maurice River and shared over 60 years of marriage together. Ron was employed for over 30 years by NJ Bell Telephone, later Bell Atlantic and then Verizon from 1955 until 1985, and held several technical and management positions. He later held the title of Housing and Building Inspector for the City of Millville, retiring after 13 years in 1998. Ron was a longtime member of the First Presbyterian Church on Maurice River in Millville, where he served as an ordained deacon and elder. He was also a very dedicated Mason at Shekinah Lodge No. 58 in Millville for many years. He served twice as Worshipful Master in 1976 and 1991. He was appointed Grand Chaplain in 1985 at the state level, held the position of secretary of Shekinah Lodge for 22 years, and he was also about to receive his 50 year pin. He was a past member of the Millville Jaycees from 1957 - 1968, serving both as Internal and External vice presidents. He was also active with Boy Scout Troop 24 from 1966 - 1968. He was awarded Father of the Year in 1969. Ron was named as one of Ten Thousand Outstanding Young Men in America in 1971. He also enjoyed helping out with Habitat for Humanity whenever he was able. Ron truly lived a dedicated life of service to his community and will be sadly missed by those that had the privilege of knowing him. Ron enjoyed watching the Eagles and Phillies. He loved working in his beautiful yard and especially enjoyed traveling the world and dining out with his wife, Mimi. Together they traveled throughout Europe, Russia, China, and Egypt, but most of all, he cherished the time that he was able to share with his family. Ron will be sadly missed by his loving wife, Miriam "Mimi" (DeTora) Spiels; two daughters, Rhonda Spiels of Millville, and Diane Carpenter (Greg Erber, Jr.) of Vineland; and his brother-in-law, Paul Brewin. He was predeceased by his sister, Ruth Patricia Brewin. Funeral Services for Ron will be conducted on Saturday, June 9th, 2018 at 11:00 a.m. in the First Presbyterian Church on Maurice River, 119 North 2nd Street, Millville. Family and friends may call from 9:30 a.m. to 11:00 a.m. in the church. A Masonic Service for Ron will begin promptly at 10:00 a.m. in the church. Burial will be in Mt. Pleasant Cemetery, Millville. In lieu of flowers, the family requests that donations be made in Ron's memory to the First Presbyterian Church on Maurice River, 119 North 2nd Street, Millville, NJ 08332. Memories and expressions of sympathy for Ronald Nicholas Spiels may be shared on the Obituary Tribute Wall at: www.christyfuneralservice.com.

The family of Ronald Nicholas Spiels created this Life Tributes page to make it easy to share your memories.

Send flowers to the Spiels family.