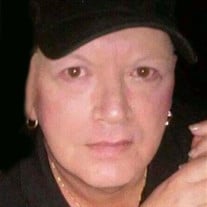 Ronald "Ronnie" T. Clark Pereira, age 59 of New Hope, PA and formerly of Millville, passed away peacefully on Wednesday morning, April 4, 2018. Ronnie was born in Camden, but due to his family's unwavering and dedicated service to the U.S. Marines, Ronnie grew up living in many different places all over the world, and finally settled down in Millville, where he was a resident for many years, only recently moving to New Hope, PA. Ronnie graduated from Millville High School, Class of 1977 and also attended Cumberland County College. Ronnie was a longtime employee of the Sharp Street Wawa in Millville. He then worked as an LPN at the Renaissance Nursing Home and then at the Maurice House for several years. Ronnie loved disco and oldies music, and truly enjoyed the nightlife and going to the clubs with his friends. He also enjoyed cooking and many crabbing trips to Turkey Point. Most of all Ronnie cherished the time that he was able to share with his friends and family. Ronnie will be sadly missed by his Spouse of over 38 years, Larry Sanfilippo of New Hope, PA; their "adopted son", Ryan Mcclintock; one brother, Michael Clark and wife Kimberly of Northfield; one sister, Susan Plotts and husband James of West Deptford; mother-in-law, Ann Ganci; brother-in-law, Eddie Sanfilippo; two sisters-in-law, Debbie and Cindy Sanfilippo; several nieces and cousins; his loving Boston terrier, Winston; and his parrot, Peanut. He was predeceased by his parents, Col. Ronald Vincent Pereira and Karen (Olson) Pereira. Funeral Services for Ronnie will be conducted on Friday, April 20, 2018 at 11:30 a.m. in the Christy Funeral Home, 11 W. Broad Street, Millville. There will be a viewing from 10:00 a.m. to 11:30 a.m. in the funeral home. Burial will be in Greenwood Memorial Park, Millville. Memories and expressions of sympathy for Ronald T. Pereira may be shared on the Obituary Tribute Wall at: www.christyfuneralservice.com.

Ronald "Ronnie" T. Clark Pereira, age 59 of New Hope, PA and formerly of Millville, passed away peacefully on Wednesday morning, April 4, 2018. Ronnie was born in Camden, but due to his family's unwavering and dedicated service to the U.S.... View Obituary & Service Information

The family of Ronald "Ronnie" T. Clark Pereira created this Life Tributes page to make it easy to share your memories.

Send flowers to the Pereira family.