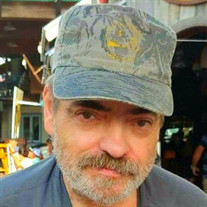 Robert "Bobbo" David Weeks, age 60 of Millville, passed away peacefully on Monday, April 5, 2021 after an extended illness, at Inspira Medical Center, Vineland. Born in Millville and raised in Vineland to the late Vernon Simpkins and Viola Petit Schwegle, Robert graduated from Vineland High School and was a lifelong Millville resident. Robert worked for Perryman's for many years as a Bridge Builder. He then went on to work at S & J Pizza in Millville for many years. He went on to work with his best friend Mary and his brother Billy as a driver for Millville Yellow Cab for several years before going to work, once again with Mary, at Elwyn for about one year, and retired. Robert loved to go freshwater fishing and also enjoyed building miniature wooden villages. He always eagerly anticipated his Saturday nights in his man cave, which was fully outfitted with all the amenities a guy could wish for. Most of all, Robert treasured the time that he was able to share with his family and friends. Robert will be sadly missed by his longtime best friend and caregiver, Mary Ballou of Millville; one brother Thomas Weeks of Delaware City, Delaware; Mary's four sons, who Robert treated as his own, Edward Ross, Allen Ross, Michael Ross, and Steven Slimmer, all of Millville; Mary's eleven grandchildren, who Robert treated as his own, Michael Ross, Jr., Shawn Ross, Nicholas Ross, Skylar Slimmer, Anthony Ross, Devon Ross, Christina Fichera, Jamie Thompson, Valentina Ross, Amber Ross, and Summer Slimmer; Mary's three great-grandchildren, who Robert treated as his own, Dereck Bailey, Brayden Nolte, and Benjamin Orillion; and many nieces, nephews, and cousins. He was predeceased by one brother William Weeks; two sisters, Connie Chalow and Delores Cooper; Shawn Ross, who was like a son to him; Kayla Ross and Gavin Riggins, who were like grandchildren to him; and his loving dog, Booger. Services for Robert will be private at the convenience of the family. Arrangements are under the direction of the Christy Funeral Home, Millville. Memories and expressions of sympathy for Robert David Weeks may be shared on the Obituary Tribute Wall at: www.christyfuneralservice.com.

Robert "Bobbo" David Weeks, age 60 of Millville, passed away peacefully on Monday, April 5, 2021 after an extended illness, at Inspira Medical Center, Vineland. Born in Millville and raised in Vineland to the late Vernon Simpkins and Viola... View Obituary & Service Information

The family of Robert "Bobbo" D. Weeks created this Life Tributes page to make it easy to share your memories.

Send flowers to the Weeks family.