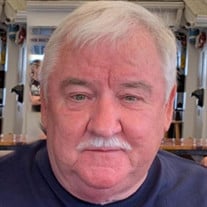 Robert Ronald Robinson, age 74 of Millville, went home to be with the Lord on Tuesday, March 2, 2021. Robert passed away peacefully, with his family by his side, after a brief illness, at Inspira Medical Center, Vineland. Born in Millville and raised by the late Samuel and Doris E. (Haines) Lutz, Robert was a lifelong Millville resident. He graduated from Millville High School, Class of 1965, and went on to attend Wesley College in Delaware. He then attended the Millville Hospital School of Radiology and became a radiology technician. Over the years, Robert worked as the chief technologist at Millville Hospital, Newcomb Hospital, and then Cumberland Orthopedics / Reconstructive Orthopedics. While working at Millville Hospital, Robert met his wife Helen Marie and they were married in 1973. They shared over 47 years of marriage together and lovingly raised their daughter, Krista. Robert loved spending time outdoors with his family, whether it was fishing the back creeks or hunting for ducks and small game. Robert was a longtime member of the Millville Church of the Nazarene and a member of A.A.R.T. He also loved traveling to different restaurants all over South Jersey. Robert took great pride in watching his grandson Trevor play baseball. He treasured the time that he was able to share with his family, and was especially proud of his grandsons, who he loved dearly. Robert will be sadly missed by his loving wife Helen Marie (Schwegel) Robinson of Millville; his daughter, Krista Yeager (Trevor Ernest) of Millville; one brother Wayne S. Lutz and wife Judy of Millville; one sister Cindy Woods of TX; sister-in-law Joyce Tilka of Millville; two grandsons, Trevor J. Yeager and Brysen K. Yeager, both of Millville; seven nieces and nephews, Heather Lambert, Karen Haddock, Matthew Lutz, Katie Lutz, Cynthia Martin, Douglas Woods, and Tim McFadden; two grand-nephews, Cole and Zach; two grand nieces, Ruby and Willow; and two grand-fur babies, Harlee and Remington. He was predeceased by his grandmother, Ruth Haines, whom he loved dearly. A funeral service for Robert will be conducted on Friday, March 5, 2021 in the Millville Church of the Nazarene, 2201 E. Main Street, Millville. Family and friends will be received from 9:30 a.m. to 11:00 a.m. in the church. Burial will be in Mt. Pleasant Cemetery, Millville. Please remember to practice social distancing while in the church and cemetery. Also, masks are required to be worn in the church at all times. Arrangements are under the direction of the Christy Funeral Home, Millville. In lieu of flowers, memorial contributions in Robert's memory may be made to the Millville Church of the Nazarene, 2201 E. Main Street, Millville, NJ 08332. Memories and expressions of sympathy for Robert Ronald Robinson may be shared on the Obituary Tribute Wall at: www.christyfuneralservice.com.

Robert Ronald Robinson, age 74 of Millville, went home to be with the Lord on Tuesday, March 2, 2021. Robert passed away peacefully, with his family by his side, after a brief illness, at Inspira Medical Center, Vineland. Born in Millville... View Obituary & Service Information

The family of Robert Ronald Robinson created this Life Tributes page to make it easy to share your memories.

Robert Ronald Robinson, age 74 of Millville, went home to be...

Send flowers to the Robinson family.