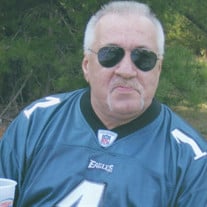 Robert Wayne "Mac Daddy" McDowell, age 67 of Millville, passed away peacefully, Sunday, November 13, 2016, surrounded by his family, after a brief illness. Born and raised in Millville to the late William and Bertha (Young) McDowell, Mac Daddy was a lifelong resident. He was a proud volunteer of the Millville Fire Department for 11 years. He then worked as a State Correctional Officer for a total of 25 years at Bayside State Prison and then South Woods State Prison, retiring as a Staff Sergeant. Mac Daddy was an avid Eagles and Phillies fan. He loved fishing, playing poker online, and especially enjoyed hanging out with his friends at the Eagles lodge. He was a longtime member of the Fraternal Order of Eagles, Aerie 1836 of Millville. However, his best times were when he was having a talk and a beer with his son, Ron. He also cherished the 25 years that he was able to share with his loving wife, Joyce. Mac Daddy will be sadly missed by his wife, Joyce (Smith) of Millville; two sons Ron McDowell of Millville and Scott Potter of Tennessee; two step-sons Ronnie and Mike Clifford; two step-daughters Tina Beakley and Dolly Dorzan; two sisters Beverly Langston and Bonnie McDowell; one brother Bill McDowell; granddaughter Melanie McDowell; many other grandchildren, nieces, nephews, and cousins; and his loving Black Labrador Retriever, Rebel. Funeral services will be conducted at 12 noon on Thursday, November 17, 2016 in the Christy Funeral Home, 11 W. Broad Street, Millville. There will be a viewing from 10 a.m. until 12 noon in the funeral home. Burial will be in Greenwood Memorial Park, Millville. Memories and expressions of sympathy for Robert "Mac Daddy" McDowell may be shared on the Obituary Tribute Wall at www.christyfuneralservice.com.

The family of Robert "Mac Daddy" Wayne McDowell created this Life Tributes page to make it easy to share your memories.

Send flowers to the McDowell family.