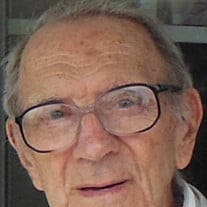 Raphael Charles Krobath, age 94 of Vineland, and formerly of Millville, passed away Tuesday morning, May 6, 2014 at Inspira Medical Center, Vineland. In 1920, Raphael was born in a small town in Eastern PA called Heckscherville. He was one of nine children. He graduated from Pottsville Catholic High School in 1939, and worked a short time for Bethlehem Steel in Steelton, PA before joining the U.S. Army in 1943. For three years he served under General Patten as a Motor Pool Sgt. in Northern France, Rhineland and Central Europe. His Decorations and Citations included: a Good Conduct Medal, American Campaign Medal, W.W.II Victory Medal, and a European African Middle Eastern Campaign Medal with three Bronze Stars. Around 1946, Raphael came to NJ in search of a job. He began work at Armstrong Cork Co., and retired from Kerr Glass as a Mold Checker. That same year, he met his future bride, Dorothy (Swartz) at Armstrong Cork Co., and they were married on August 23, 1947 at St. Mary Magdalen Church in Millville. He and Dorothy spent five happy years working together, and they themselves built their Dream Home in Millville. In 1997, they celebrated their 50th Wedding Anniversary. He enjoyed traveling, especially to Niagara Falls, Colonial Williamsburg, Lancaster, Hershey Park, Luray Caverns, and Texas. Over the years, he has been best known as Ray, Poppy, or “Mr. Fix it.” Raphael was a member of St. Mary Magdalen Roman Catholic Church, the Knights of Columbus, First Assembly of God Church and the Fairton Christian Center, where he served as a faithful usher in all three churches for over 35 years. He and his wife volunteered for Hospice of South Jersey, and Operation Blessing. He was also a member of the GBBA. Raphael is survived by his wife of 66 years, Dorothy (Swartz); one son David R. Krobath and wife Deborah of Houston, TX; one daughter Carol Malone and husband Dan Sr. of Vineland; three grandchildren, Kevin Krobath, Dan Malone Jr. and wife Kristy, and Ryan Malone; and many nieces and nephews. He was predeceased by his parents, Joseph and Rosa (Kramer) Krobath; and his siblings, Gabriel and Francis Krobath, Mary Ryan, Gertrude Quinn, Rosalee Kirk, Loretta Kessler, Dorothy DeLaney, and Catherine Atkinson. Funeral services will be conducted at 1 p.m. on Friday, May 9, 2014 in the Christy Funeral Home, 11 W. Broad Street, Millville. Viewings will be Thursday from 6 to 8 p.m. and Friday from 12 to 1 p.m. in the funeral home. Burial will be in Greenwood Memorial Park, Millville. Memories and expressions of sympathy for Raphael Krobath may be shared on the Obituary Tribute Wall at: www.christyfuneralservice.com.

Raphael Charles Krobath, age 94 of Vineland, and formerly of Millville, passed away Tuesday morning, May 6, 2014 at Inspira Medical Center, Vineland. In 1920, Raphael was born in a small town in Eastern PA called Heckscherville. He... View Obituary & Service Information

The family of Raphael Charles Krobath created this Life Tributes page to make it easy to share your memories.

Raphael Charles Krobath, age 94 of Vineland, and formerly of...

Send flowers to the Krobath family.