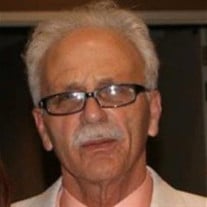 Phillip C. "Phil" Mori, age 76 of Vineland, passed away Thursday morning, December 19, 2019 at Inspira Medical Center in Vineland, after a brief illness. Born in Brooklyn, NY to the late Giacomo James and Stella Alma (DeLozier) Mori, he moved to Millville in 1956. Phil served in the U.S. Navy from 1960 to 1970. He retired from the 3rd Battalion 102d Armor NJARNG, after serving with the National Guard from 1975 to 1985. For 25 years, he worked at the NJ Department of Corrections-Southern State, where he retired as a Lieutenant. Phil was a member of the American Legion Nabb-Leslie, Post No. 82 of Millville. He was a former member of Gold Wing Road Riders Association, and he enjoyed numerous rides with his late wife and many friends. He was also a member of St. Isadore the Farmer Church in Vineland. In his younger years he enjoyed fishing. Phil was an avid reader, and he loved watching old western shows, and true-crime television. He was a devoted fan of the Philadelphia Flyers, NY Mets, and NY Giants. As a passionate gardener, Phil had an exceptional green thumb, taking pride in his landscaping creations. He will be missed by his family and friends, particularly for his great sense of humor. Phil is survived by his daughters, Nancy Mori- Dolson (Charles) of Upper Deerfield, and Allison Mori (Clifton) of Vineland; two grandchildren, Avery and August; his companion Linda Dunbar of CMCH, his siblings, Raphaela Mori of AZ, Jack Mori (Elaine) of Metuchen, and Lucy Pustizzi (John) of Vineland; and many nieces, nephews, granddogs, and grandcats. He was predeceased by his wife Nancy (Massinger) in 2004; and one brother John. A Memorial Mass will be conducted at 12 p.m. on Saturday, January 4, 2020 at St. Isadore the Farmer Church, 1655 Magnolia Road, Vineland, with a calling hour from 11 a.m. to 12 p.m. in the church. Burial will be private at the convenience of the family. Arrangements are under the direction of Christy Funeral Home, Millville. In lieu of flowers, the family requests memorial contributions to the Wounded Warrior Project, PO Box 758516, Topeka, KS 66675, or to St. Jude Children's Research Hospital, 501 St. Jude Place, Memphis, TN 38105. Memories and expressions of sympathy for Phillip C. Mori can be shared on the Obituary Tribute Wall at www.christyfuneralservice.com.

The family of Phillip C. Mori created this Life Tributes page to make it easy to share your memories.

Send flowers to the Mori family.