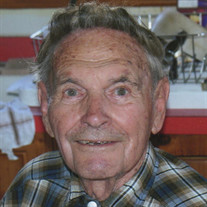 Peter "Pop" Brozina, age 99 of Millville, was called home on Friday May 6, 2016. Born and raised in Millville, New Jersey, Pop was a life long resident of the Holly City. In 1941 Pop was drafted into the United States Army’s 3rd Armored Division, where he achieved the rank of Staff Sergeant, while serving his country in World War II. During his time in the service, Pop fought in the campaigns and battles of Normandy, Ardennes, Rhineland, Northern France and Central Europe. Pop was awarded the Bronze Star, Good Conduct, American Defense and the European African Middle Eastern Service Medals. After his return from the war, Pop worked 10 years at Earl Bittle’s Garage as a mechanic, where he proudly never missed a day of work. In 1955, Pop started working for Wheaton Glass in Millville as a machine and vehicle mechanic until his retirement in 1982. Pop was a member of the Fourth United Methodist Church in Millville. Pop enjoyed working on cars, fishing and crabbing in his younger years and spending time with his family and friends. He was known for his peppers and tomatoes that he grew each year in his garden. Pop is survived by his son Paul Brozina of Millville, NJ; his granddaughter Lauren Price of Los Angeles, CA; his sister Helen Smith of Millville, NJ; and nephew Fred Smith of Millville, NJ, along with other nieces and nephews. Pop was predeceased by his wife Beatrice Brozina; his daughter Kim D. Jones; his father and mother Samuel and Anna Brozina; brothers, Charles, Steven, John and sister Mary. Funeral services will be conducted at 11 a.m. on Thursday, May 12, 2016 in the Christy Funeral Home, 11 W. Broad Millville. Viewings will be Wednesday from 6 p.m. to 8 p.m., with a Veteran's Service beginning at 6 p.m., and Thursday from 10 a.m. to 11 a.m. in the funeral home. Burial will be in Greenwood Memorial Park, Millville. Memories and expressions of sympathy for Peter Brozina may be shared on the Obituary Tribute Wall at www.christyfuneralservice.com.

Peter "Pop" Brozina, age 99 of Millville, was called home on Friday May 6, 2016. Born and raised in Millville, New Jersey, Pop was a life long resident of the Holly City. In 1941 Pop was drafted into the United States Army&#8217;s 3rd... View Obituary & Service Information

The family of Peter Brozina created this Life Tributes page to make it easy to share your memories.

Peter &quot;Pop&quot; Brozina, age 99 of Millville, was called home on...

Send flowers to the Brozina family.