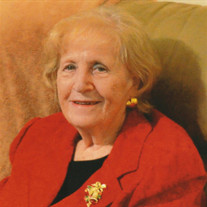 Pauline Louise (Romanick) Pokorny, age 79 of Millville, passed away unexpectedly, Monday, August 29, 2016 after a brief illness, at Inspira Medical Center, Vineland. She was a beloved wife, mother, and grandmother who will be sadly missed by her family. Born to the late Antony and Mary (Baker) Romanick, Pauline was raised in Millville, and was a lifelong resident. Pauline graduated from Millville High School, Class of 1955. She then married the love of her life, Stephen, and together they shared over 59 years of happiness together. She was a member of St. Nicholas Ukrainian Catholic Church in Millville. Pauline was the co-owner of Heaven's Mark Arts & Crafts and also the Gallery Curator for Dream Creations, both in Millville, for over 25 years. She truly enjoyed making beautiful flower arrangements for her businesses. She was a devoted wife, loved being a homemaker and also working outside in the garden. She especially enjoyed taking care of her cats, who she loved very much. One of Pauline's favorite pastimes was dressing up and going out dancing with her husband Stephen for many years at the Ukrainian Dance Hall in Millville. Pauline is survived by her loving husband Stephen J. Pokorny, Sr.; one son Stephen J. Pokorny, Jr. and wife Katherine of Millville; one daughter Darlene Harris of Millville; five grandchildren, Mark and Jeff Harris, both of Millville, Heaven McNamara and husband Shaughn of Louisiana, Stephanie Krumins and husband Phil of Franklinville, and Melanie Pokorny of Millville; one great granddaughter Laelia McNamara of Louisiana; and many nieces and nephews. She was predeceased by one brother Joe Romanick; and two sisters, Helen Tubertini and Ann Brago. A Mass of Christian Burial will be celebrated at 11 a.m. Friday, September 2, 2016 at St. Nicholas Ukrainian Catholic Church, 801 Carmel Road, Millville. There will be a viewing on Thursday from 6 p.m. to 8 p.m. with a Panachyda Service beginning at 7 p.m., and a viewing on Friday from 9 to 10:30 a.m. in the Christy Funeral Home, 11 W. Broad Street, Millville. Burial will be at St. Nicholas Ukrainian Catholic Church Cemetery. Donations may be made in Pauline's memory to The Knights of Columbus, 411 Cedar Street, Millville, NJ 08332. Memories and expressions of sympathy for Pauline Louise Pokorny may be shared on the Obituary Tribute Wall at www.christyfuneralservice.com.

Pauline Louise (Romanick) Pokorny, age 79 of Millville, passed away unexpectedly, Monday, August 29, 2016 after a brief illness, at Inspira Medical Center, Vineland. She was a beloved wife, mother, and grandmother who will be sadly missed... View Obituary & Service Information

The family of Pauline L. Pokorny created this Life Tributes page to make it easy to share your memories.

Send flowers to the Pokorny family.