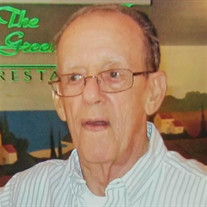 Paul Wayne Silvers, age 87 of Millville, passed away peacefully, surrounded by his loved ones on Wednesday evening, January 15, 2020. Home and his kids were always #1. Wayne was truly a simple man; just give him a chair, a cup of coffee, the TV, and a Hershey with Almond Bar, and he was a happy camper. Born in Landisville to the late Pearl (Silvers) Kelly, Wayne was raised in Millville, attended Millville Public Schools and was a lifelong resident. As a teen, he was a member of the Sea Scouts, and enjoyed many activities with them such as hiking the Appalachian Trail. In his younger years, Wayne also enjoyed frequent swims across Union Lake. Wayne served our country in the Army National Guard for eight years as a tank operator. He was proud that he had the opportunity to drive the general around in his Jeep many times. Wayne worked at Wheaton Glass Co. in Millville for over 38 years, working his way up to the shift foreman position, and retired in 1989. Golf, bowling, fishing, and crabbing were but a few of Wayne's favorite pastimes. He was a big Eagles fan and also enjoyed camping all over the east coast with his family. He treasured the time that he was able to share with his family, whether at home or on one of those special camping trips that he had such fond memories of. Wayne will be sadly missed by his loving wife of over 67 years, Elaine (Kwasnicki) Silvers of Millville; one son Kerry Silvers and wife Sara of Campbellsburg, Indiana; three daughters, Wendy Schmitt of Vineland, Laurie Silvers of Millville, and Judy King of Vineland; one brother Charles Henderson and wife Marion of Ocean City; seven grandchildren; 14 great-grandchildren; four great-great-grandchildren; many nieces, nephews, and cousins; and his loving cat Little Man. He was predeceased by his son Paul Steve Silvers; his daughter Cindi Jo Davis; and one sister Theresa Flegel. A Funeral Service for Wayne will be conducted on Tuesday, January 21, 2020 at 11:00 a.m. in the Christy Funeral Home, 11 W. Broad Street, Millville. Family and friends will be received from 10 to 11 a.m. in the funeral home. Burial will be in Greenwood Memorial Park, Millville. In lieu of flowers, memorial contributions in Wayne's memory may be made to St. Jude Children's Research Hospital, 501 St. Jude Place, Memphis, TN 38105 or at the website: stjude.org, or The Salvation Army, 733 E. Chestnut Ave., Vineland NJ 08360 or at the website: give.salvationarmyusa.org. Memories and expressions of sympathy for Paul Wayne Silvers may be shared on the Obituary Tribute Wall at: www.christyfuneralservice.com.

Paul Wayne Silvers, age 87 of Millville, passed away peacefully, surrounded by his loved ones on Wednesday evening, January 15, 2020. Home and his kids were always #1. Wayne was truly a simple man; just give him a chair, a cup of coffee,... View Obituary & Service Information

The family of Paul Wayne Silvers created this Life Tributes page to make it easy to share your memories.

Send flowers to the Silvers family.