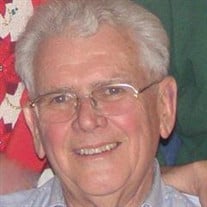 Paul G. Menz, a true Millville man, died Friday November 18, 2016 peacefully in his home. Born on October 30, 1934 to Paul V. and Gertrude D. Menz, he called Millville home for the vast majority of his life. Paul attended St. Mary Magdalen School, graduated from Sacred Heart High School in 1952 and subsequently earned a Mechanical Engineering degree from Villanova University in 1956 and ultimately a Masters from Drexel University in 1961. His affiliation with Villanova ran long and deep. After graduation he served in various professorial roles in its Engineering department from 1957 through 2009. He truly was a Wildcat and basked the school’s successes in the classrooms and athletic arenas. In 1970 his teaching ability brought him back home full-time at Cumberland County College, where he served as its Engineering Professor for thirty years until his retirement. He was a member of the American Society of Engineering Education, the American Society of Heating, Refrigeration and Air Conditioning Engineers and a Registered Professional Engineer. Outside of the lecture hall, his engineering abilities led to many great adventures including working for the Apollo Space Project, a hydroelectric plant in France, the National Park Service and as a civilian contractor for the United States Navy. Among his proudest achievements is designing the heating and air conditioning for the Statue of Liberty, and sailing the seas on aircraft carriers in awe of the men flying and landing the jets. He truly embodied “joie de vivre”, a passion for life. But he always loved and came home to Millville. Paul was also a true sportsman and man for all seasons. He enjoyed a ball game of any sort, and often rooted for the umpires or referees in admiration of their work. He regularly enjoyed golfing with his colleagues, and spent many fall and winter afternoons hunting small game. His real outdoor passion was fishing, particularly on Union Lake where he knew every cove, or fishing hole as well as its history. Though his profession and pastimes were important, Paul’s passion remained family and friends. He enjoyed their companionship on any occasion, and lifted his company’s spirits with his light-heartedness, kindness and humor. He was predeceased by his beloved wife, Eileen Long-Menz. As a couple Eileen and Paul traveled the world, sipped fine wine, and truly enjoyed their lives together. He was also predeceased by his sister, and true friend, Adele Commander as well as his parents. Those surviving family members who will forever miss his kind ways and gentle personality include his four sons; Paul D. Menz and wife Wendy of Vineland, NJ, James G. Menz of Wilmington, DE, Michael P. Menz and wife Loretta of Barrington, NJ, and Mathew F. Menz and wife Cindy of York, SC; as well as three step-daughters: Kathleen Long, MD of Marietta, GA, Susan Long and husband John of Greensboro, NC, and Lynne Long of Millville. He is also survived by ten grandchildren. There will be a viewing in the Christy Funeral Home, 11 W. Broad St., Millville, on Friday, Nov. 25, 2016 from 4-6pm as well as Saturday from 11-1130am. A funeral liturgy will be celebrated at St. Mary Magdalen Church on Buck St. in Millville on Saturday at 12pm. Burial will occur at the Holy Cross Cemetery. Donations may be made in Paul’s name to: Alzheimer’s Association, Delaware Valley Chapter, 399 Market St., Suite 102, Philadelphia, PA 19106 or Compassionate Care Hospice, 518 South Shore Road, Marmora, NJ 08223. Memories and expressions of sympathy for Paul Menz may be shared on the Obituary tribute Wall at www.christyfuneralservice.com.

The family of Paul G Menz created this Life Tributes page to make it easy to share your memories.

Send flowers to the Menz family.