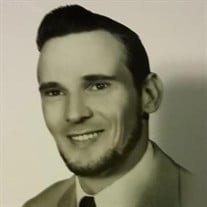 Paul Hand Sr., 82, Millville, N.J., passed away on Saturday, May 22, 2021 at Inspira Medical Center surrounded by family.    Paul was born March 1, 1939 in Millville, N.J. to Maurice and Alice Hand. He married Eva Dorothy Hand on November 9,1968.   He began working at Wheaton Glass as a young man. He worked as a truck driver at Wheaton Glass for many years. Later, he was employed at the Salem Nuclear Power Plant where he worked throughout the construction phase of the power plant. At the power plant, he was fondly known as "E.T." by his coworkers. Once the power plant was constructed, he returned to Wheaton Glass until his retirement in 1997. Throughout his retirement, he continued to work and was employed by The City of Millville for a number of years. Paul also enjoyed working on small engines and opened a shop where he repaired lawn mowers and completed similar small engine repairs.    As a young man, he served time in the U.S. Army and Army National Guard.    Paul is survived by his four children, Tracy Hand, Tiffany Pipitone (Eric), Paul Hand Jr., and Melissa Hand (Cornell A Jackson); his 9 grandchildren, Melasia Hand, Elijah Hand, Eva Hand, Yvonne Hand, Alexander Pipitone, Jacob Pipitone, Brittney Hand, Joshua Hand and Trinity Hand; his 8 great grandchildren, Wyatt, Aria, Weston, Lyla, DMarion, June, De'siah and Adriana; many nieces and nephews; his dear friend of over 60 years, Louis Pierce; and his cherished Chihuahua, "Little Dog."   He was predeceased by his wife, Eva Hand; his parents, Maurice and Alice Hand; his siblings, Lillian Ridgeway, Janet Bradford, Beverly Munyon, Oscar Hand, Charles Hand; his beloved sister and niece, Carol Parent and Florence France; and his friend of over 50 years, Phil Perrina.    A funeral service will be held on Friday, May 28, 2021 at 11:00 a.m. at Christy Funeral Home, 11 W. Broad Street in Millville with Pastor Kenyon officiating. Family and friends will be received on Friday from 10 to 11 a.m. in the funeral home. Interment will follow at Greenwood Memorial Park in Millville.  THE FAMILY REQUESTS THAT ALL VISITORS MUST WEAR A MASK IN THE FUNERAL HOME AND AT THE CEMETERY AT ALL TIMES. Memories and expressions of sympathy for Paul Hand Sr. may be shared on the Obituary Tribute Wall at www.christyfuneralservice.com.

The family of Paul Hand Sr. created this Life Tributes page to make it easy to share your memories.