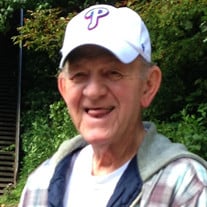 Paul Eugene Ford, age 79 of Millville, passed away peacefully, surrounded by his loving family, early Saturday morning, November 4, 2017. He had been in declining health. Born and raised in Millville to the late Walter and Helen (Young) Ford, Paul was a lifelong resident of Millville's West Side. He graduated from Millville High School, Class of 1956. Paul then spent over ten years working as a boat builder for several shipbuilders in our area, including Greenwich Boat Works, Colonial Boat Works, and Dorchester Shipbuilding. Once Paul saw the shipbuilding industry beginning to slow down, he went on to work for the City of Millville at the Waste Water Utility for over 25 years, then retired. Years ago, Paul enjoyed timing boat races all over our area, especially the races during the summertime in Laurel Lake for many years. Paul was an avid Flyers fan, attending many games over the years and also watching them on TV. Being a shipbuilder, Paul really enjoyed woodworking and also spending time with his family. He always looked forward to traveling to Fayetteville, West Virginia to visit his late wife, Ruby's family. Paul will be sadly missed by his son, Walter Ford of Millville; his daughter, Paula Ford of Millville; and one brother, Walter J. Ford of Millville. He was predeceased in 2013 by his wife, Ruby (Buckland) Ford; and in 2014 by one brother, Robert Ford. Burial will be private at the convenience of the family. Arrangements are under the direction of Christy Funeral Home, Millville. Donations in Paul's memory may be made to the Alzheimer's Foundation of America, 322 Eighth Avenue, 7th Floor, New York, NY, 10001, or at https://alzfdn.org/support-us/donate/. Memories and expressions of sympathy for Paul E. Ford may be shared on the Obituary Tribute Wall at: www.christyfuneralservice.com.

Paul Eugene Ford, age 79 of Millville, passed away peacefully, surrounded by his loving family, early Saturday morning, November 4, 2017. He had been in declining health. Born and raised in Millville to the late Walter and Helen (Young)... View Obituary & Service Information

The family of Paul E. Ford created this Life Tributes page to make it easy to share your memories.

Send flowers to the Ford family.