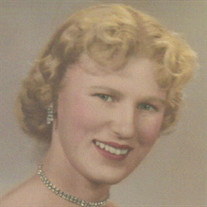 Patricia Ann (Giberson) Jones, age 81 of Millville, passed away Sunday, November 20, 2016 at her residence after an extended illness. Born and raised in Millville to the late Ellsworth and Anna (Finch) Giberson, Patricia graduated from Millville High School, Class of 1953, and was a life long resident. For over 30 years, Patricia worked for Millville Hospital where she started on the switchboard, moved to the billing department, and retired in data processing in 1997. Patricia was a member of the Parish of All Saints, St. Mary Magdalen Roman Catholic Church in Millville. She loved old movies, music, puzzles, baseball, and spending time with her precious grandchildren and great grandchildren. Patricia was a devoted and beloved wife, mother, grandmother, and great grandmother who will be sadly missed by her children; Donald D. Jones of Millville, Bret E. Jones and wife Debbie of Millville, and Glenda S. Franzwa and husband Joseph of Pittsgrove; two brothers, Terry Giberson of FL and James Giberson of Millville; six grandchildren, Christian Paul Jones, Eric Gant, Christopher J. Franzwa, Rhiannon Jones, Justin Donald Franzwa and Tara Jones; and six great grandchildren. She was predeceased by her husband Donald in 2011; and one daughter Tara Leigh Jones. Funeral services will be conducted at 10 a.m. on Friday, November 25, 2016 in the Christy Funeral Home, 11 W. Broad St., Millville. There will be a viewing on Friday from 9 to 10 a.m. in the funeral home. Burial will be in Mt. Pleasant Cemetery, Millville. The family requests memorial contributions to one's local chapter of the Alzheimer's Association: www.alz.org. Memories and expressions of sympathy for Patricia Ann Jones may be shared on the Obituary Tribute Wall at www.christyfuneralservice.com.

Patricia Ann (Giberson) Jones, age 81 of Millville, passed away Sunday, November 20, 2016 at her residence after an extended illness. Born and raised in Millville to the late Ellsworth and Anna (Finch) Giberson, Patricia graduated from Millville... View Obituary & Service Information

The family of Patricia Ann Jones created this Life Tributes page to make it easy to share your memories.

Send flowers to the Jones family.