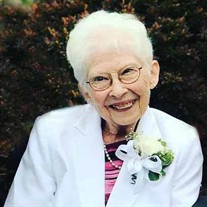 Patricia (Haggerty) Dunham, age 86, went home to be with the Lord on July 22, 2019 at Maurice House Assisted Living in Millville. Born in Millville on May 5, 1933 to Maurice and Florence (Loper) Haggerty, Pat grew up in Millville and graduated from Millville High School in 1950, where she was a Varsity Cheerleader. Pat learned to dance at an early age and performed at the Steel Pier and other area attractions. She was a member of Second United Methodist Church where she met the love of her life, Herbert Dunham, Jr. Herb and Pat were married on June 13, 1953, and moved to North Jersey where they started their family. They returned to Millville in 1957 where they remained until retirement in 1994. After that they moved to North Port, Florida for 12 years, returning in 2006 to be close to children and grandchildren. Pat was a medical secretary for Dr. William Fithian and then Regional Medical Associates, the practice of Dr. Fithian and Dr. Charles Mintz, but being a Mother and Grandmother was the joy of her life. She truly loved her Lord, and was active at Second United Methodist Church as a choir member, Sunday School teacher, and a member of the Edna Dunham Circle. Upon returning to Millville in 2006, she became a member of the Millville Church of the Nazarene. She was predeceased by her parents and her Aunt Bea Haggerty, whom she loved as a second mother. She leaves behind her loving husband of 66 years, Herbert; a sister, Judith Wettstein (Richard) of Millville; her daughter Judith Lutz (Wayne) of Millville; son Keith Dunham (Julie) of Princeton, NJ; and grandchildren, Matthew Lutz (Kristen), Cynthia Martin (Walt), and Kathleen Lutz, all of Millville. Also Jeremy Dunham of North Carolina, Kristina Eikrem (Leif) of Princeton, and Josiah Dunham (Kate) of Philadelphia. She also had 6 great-grandchildren, Douglas, Ryan, Cole, Zachariah, Willow and Ruby Martin, as well as several nieces and nephews. Funeral services will be conducted at 10:30 a.m. on Saturday, July 27, 2019 in the Millville Church of The Nazarene, 2201 E. Main Street, Millville. Family and friends will be received on Saturday from 9 to 10:30 a.m. in the church. Burial will be in Mt. Pleasant Cemetery, Millville. Arrangements are under the direction of Christy Funeral Home. In lieu of flowers donations can be made to Millville Church of the Nazarene. Memories and expressions of sympathy for Patricia Dunham may be shared on the Obituary Tribute Wall at www.christyfuneralservice.com.

Patricia (Haggerty) Dunham, age 86, went home to be with the Lord on July 22, 2019 at Maurice House Assisted Living in Millville. Born in Millville on May 5, 1933 to Maurice and Florence (Loper) Haggerty, Pat grew up in Millville and graduated... View Obituary & Service Information

The family of Patricia H. Dunham created this Life Tributes page to make it easy to share your memories.

Send flowers to the Dunham family.